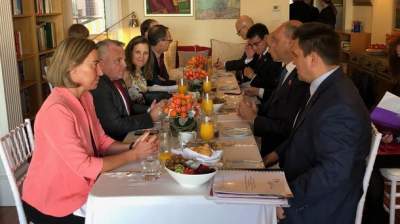 The meeting was attended by Minister of foreign Affairs of Ukraine.

In Toronto began meeting of foreign Ministers of the “Big seven”, dedicated to Ukraine.

“Began the meeting of foreign Ministers of the G7, together with Pavlo Klimkin on Ukraine”, – stated in the message.

In addition, during the meeting, Klimkin held talks with his German colleague Heiko Maas.

The Ukrainian foreign Ministry expects that the participation of the head of Department, the event will facilitate the proper reflection of the Ukrainian question in the discussions and final documents of the G7 in 2018.

“Ukraine is interested in continuing the constant support of the countries “Big seven”, in particular to combat ongoing Russian aggression, respect for sovereignty and territorial integrity of our state, the de-occupation of Crimea, countering the propaganda and hybrid threats, issues of energy security, sanctions against Russia, support for reforms in Ukraine”, – reported earlier in the Ukrainian foreign Ministry.