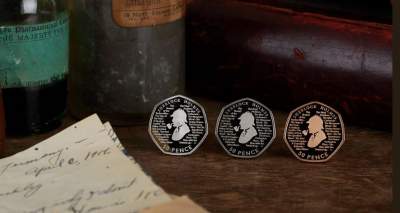 The entire text is so small that to read it without the aid of any additional devices impossible.

The issue of coins dedicated to the 160th anniversary from the birthday of writer Arthur Conan Doyle. The famous detective has appeared on a British coin for the first time. In addition to the recognizable profile of the detective’s signature hat and a Smoking pipe were written the names of books.

“The only way “to solve the riddle of the text” is to use a tool that he always carried with him a detective, a magnifying glass,” – said Steven Ro who invented the design of the coin.

The value of a coin depends on the alloy from which it is made. So, the most common is £ 10 and the gold – 795 pounds. At the moment the whole circulation of gold coins, which are produced only 400 units are already reserved, is also completely sold out silver coin for £ 55.

There was a part of the circulation of silver coins piedfort (numismatic term for a coin made of ordinary stamps from blanks of double thickness) at 90 pounds and the most inexpensive. To consider and book them on the website of the mint.