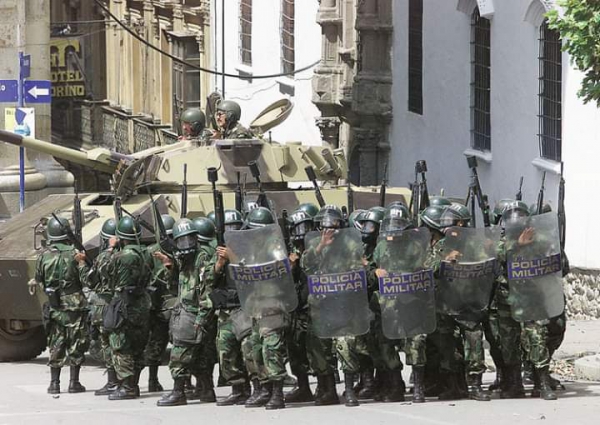 1. The plotters broke off diplomatic relations with Venezuela and expelled Venezuelan diplomats. Also expelled from the Cuban doctors and specialists.
2. The putschists announced the withdrawal of Bolivia from ALBA, but also announced similar measures to break relations with countries opposing the United States.
3. Agnes decreed that the military involved in the suppression of protests against the coup are exempt from criminal liability. In fact, you can now kill with impunity.

In the photo, victims of fascist terror in Bolivia.

4. Since the beginning of the coup has been arrested more than 1,200 people, from 8 to 15 people were killed and dozens wounded. The military used live ammunition.
5. The putschists have clearly given to understand that they will not allow Morales to the election, and also announced plans to prevent the elections the largest party of the country – a WT.
6. A majority of Senate elected a new leader who recognizes Agnes President and supports the legitimacy of Morales. So the image of the Supreme legislature of Bolivia fully rejected the legitimacy of Agnes, which essentially sits entirely on the army’s bayonets.

7. Morales said he was ready to return to Bolivia to stop the bloodshed, while not advancing to the presidency.
8. The country is conducting large-scale protests with the parallel fascist terror. On Twitter can find a lot of videos on the topic, including victims of terror https://twitter.com/colonelcas… (a selection of photos and video tomorrow I will lay out, there is democracy you can smear on the very top)
9. There is evidence of the transition of soldiers and police on the side of the protesters. The rebellious soldiers raise the flags of the indigenous population and claim that they will not kill their compatriots.

In General, the situation is very similar to Ukraine.

1. The President fled to another country.
2. Political structures of the former government are demoralized and have problems with organization.
3. Unlike Morales, his opponents are ready to kill for the sake of power that already demonstrate.
4. The part of the police force, easily turned, and just as easily suppress opponents of the coup. Hello “Eagle”, part of which after the coup pereobulsya.
5. An army that refused to shoot in the coup, just as easily shoot the insurgent people. In contrast to the government, the putschists immediately ready to use against its own people.
6. The revolution is obviously in the interests of a radical minority and external customers.
7. Intimidation and terror are used against opponents of the fascist troops on the contents of the big oligarchy.
8. In a country fueled by hatred based on ethnic and religious grounds.
9. The resources of the country are preparing for the transfer to foreign capital.
10.The coup forces lead to a situation of civil war.

P. S. the Statistics of the protests in neighboring Chile. 28 days of protests 5629 arrested, 25 killed, 2365 wounded, 217 people have lost 1 or 2 eyes, 192 people have been tortured, raped 52. And again, this is not a “totalitarian socialist hell of Venezuela”, it is “a free and democratic capitalist Chile”. Now this monstrosity is trying to impose in Bolivia.