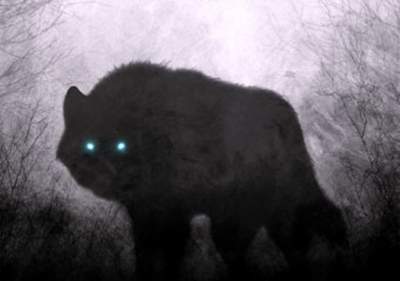 In a Tree beast of a dog ripped in half, the other bitten.

On Clonidine began the hunt for the unknown beast-killer. This was stated by the Chairman of the village Council Derevenskogo Vasil Siomucha.

Recall that the unknown beast, the killer was attacking Pets in Slonimsky villages in early August. In a Tree beast of a dog ripped in half, the other bitten.

Then he wandered into the village of Zagnitkov Slonim district, where he killed the dog and dragged the little pooch. After that, the village Dubrovina, which is close to a Village, in one of the yards have disappeared, the dog that was on the circuit, and the neighbors missing cat. The unknown animal visited the street Molchadsky in the centre of the Village and dragged the dog.

In the night from Saturday to Sunday, August 26, from court Sergey Shukhno, who lives on Shkolnaya street in the centre of the Village, lost a year-old dog.

– At five in the morning I went to feed the animals and found the dog was missing. And when the wife is exasperated cow, found on the head, leg and other remains of our goshi. All that I buried, – said the resident of the Village.

And in the night from Sunday to Monday, August 27th, the beast came to this same village on the yard to Thais Nesterovich on the street Corner, 10. The hosts managed to save his dog from the jaws of the beast.

On hours was about ten minutes first. Son Artem was watching TV, heard a loud growl. Turned on the light in the house on the street. But when ran, the beast was gone, and Bobby was limping. Artyom grabbed the dog and brought it to the house. Scary… Last night, the beast dog bitten, and our luck. People are afraid of. After eight o’clock in the evening home from work was even afraid to go in the village bushes are everywhere – Taisa said Nesterovich.

– The villages in the night on duty, members of the society of hunters, with guns, night lamps. Until four in the morning rode all the fields near the village of Zagnitkov. To no avail. To detect nothing. No trace. Forestry also works in this plan. Going today once again to discuss this issue. Come the chief of forestry, the society of hunters, and together we will work out some tactics, – said the Chairman of Derevenskogo of the village Vasil Siomucha Monday, August 27.