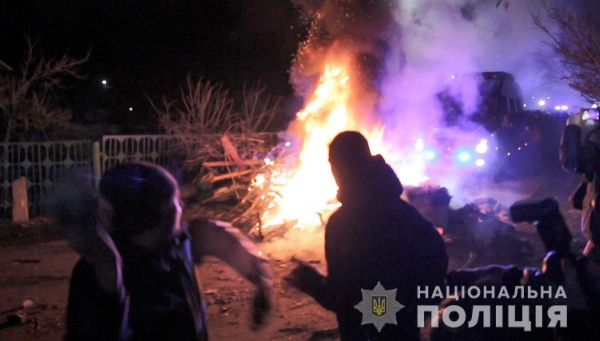 Ukrainian journalists found a New resident Sanjar, who threw stones at a bus with evacuees from the affected coronavirus compatriots. Woman has no regrets about what happened, but if I had, then went out again to protest. She stated in an interview for “Pavlovsky News”

According to a resident of Poltava region Natalia who is raising five children, she opposed the deployment arrived from China citizens in New Sanzhary. However, she was not ashamed of his behavior and because she threw stones at the buses, which were evacuated from China Ukrainians and foreigners. As the woman told, she was ashamed just because she used foul language to employees of law enforcement agencies.

“And I’ll tell you honestly, I am only ashamed one to the Mat. What the teacher saw. I his children disgraced. Because I threw stones I’m not ashamed. It would have been such – still went out and protested,” said the woman.

The woman added that the protests allegedly turned casually, because I was looking for his son. But when I saw the buses with evacuated people and health workers in overalls, she started to throw people with stones. One justified his action thus: Natalia doesn’t want her children contracted the virus from the Ukrainians, whose government brought in the sanatorium of the National guard. In addition, according to the woman, she saw the police people were not allowed to avtobusam, which further infuriated the crowd.

“In the video you will see how Packed they were. Drivers Packed was… If healthy people need to pack? We started pushing, splashing gas. We are women, we can’t overpower the police. We took stones and threw them. We are in the buses didn’t quit,” explained the woman.

Natalia also added that he could get on the bus, but not purposefully. Explained that because of the commotion could not pay attention to where throwing stones. Also told that earlier every summer we took the children to a sanatorium, but is now afraid and will not do. A resident of New Sanjar said that he had read in the media news, they say, all the evacuated people were healthy, but she did not believe in it, writing off the incident on another cheating by the authorities.

In addition, Natalia still doesn’t believe that people are completely healthy. Therefore, the New resident Sanjar sure March 5, evacuees will not be released from observation because in reality they are infected with coronavirus. She also lamented the fact that “infected” people go out on the balcony and nearby there live people, who can also catch “contagion”. At the moment the woman was handed a suspicion of disorderly conduct. It is threatened from 700 UAH to four thousand UAH of a penalty. He says justice doesn’t run out and admits guilt.

We will remind, on February 20, Ukraine has arrived the plane with evacuated Chinese Wuhan. On Board the aircraft, which landed in Kharkov, there were 94 people: 45 Ukrainians, 27 foreign citizens, as well as 22 members of the crew and accompanying medical staff. Move evacuated sparked protests in New Sanzhary – the residents of the village blocked the road and clashed with the police, vowing to Lynch people. Thus, according to the Ministry of health of Ukraine, none of which is at Poltava in the Ukrainian quarantine not recorded the increase in temperature and other characteristic features.