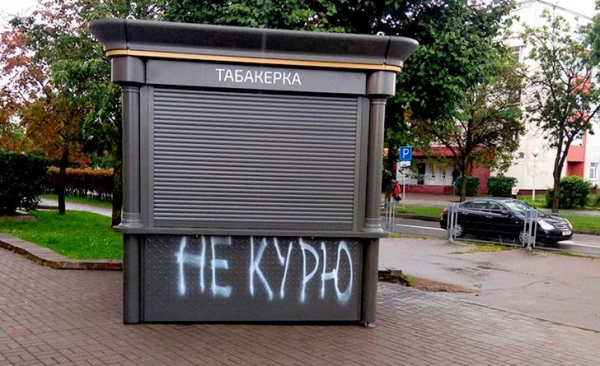 The emergence of “Snuff” in the streets caused a lot of questions, the answers to which failed to find even after a formal request to the state authorities. Recall that the fate of the kiosks active citizens become interested in even in the middle of summer, right after the first stall appeared in Sukharevo. But with the official word, no one spoke, but because the citizens had to write a petition. In late August we received the clarification from the Minsk city Executive Committee, which said that “Snuff” in vain he fought, because they “restrict the sale of tobacco products and their accessibility to minors.” But this ornateness, it seems, has only strengthened suspicions and forced the activists to write another petition, which a day will go to the Minsk city Executive Committee.

Fill With Smoke Minsk. What the citizens think about the introduction of “Snuff”

The author of a new petition I am sure that previously received from officials the answer is nothing, and therefore requires, finally, to give concrete answers to important questions. Here is the text of the petition.

“August 30, 2019 by me among the other applicants received a response to the collective electron treatment. This reply I think is not relevant requirements of the legislation in part of full, comprehensive and objective consideration of addresses and the direction of motivated and well-informed answers to the citizens, for the following reasons:

1. In the response not explained and not justified by the principle (mechanism), according to which the installation of private tobacco stalls in Minsk is supposed to reduce the consumption of tobacco products by the population.

2. In the background information that “Creation of network for implementation of the tobacco products distributed in several countries, the study showed that the isolated commercial properties contribute to the reduction of tobacco use by the population” not disclosed to the following:
– what exact type of network for implementation of the tobacco products in question (in one form or another distribution network for tobacco products exist in virtually all countries of the world)?;
– whether it took place in the countries referenced in the text, the transition to the tobacco trade exclusively through a separate commercial properties, or she simultaneously carried out via the normal retail network, as is the case at the moment in Belarus?;
– the experience of which countries were referred to background information and how this information can be checked (validate)?”

Such simple and such complex issues simultaneously. As soon as the applicants get a response, we will publish it (and will discuss).