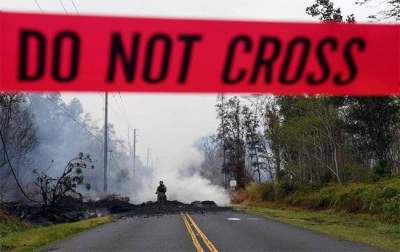 There is a volcanic eruption.

United States geological survey (USGS) has declared red level of danger air in Hawaii due to the eruption of the Kilauea volcano. This is stated in the message on the website of the service.

According to the information received before declared the orange alert level was changed to red.

As specified, the red danger level means that a major eruption is imminent, it follows from the explanations of the service. It is also noted that at the moment the ash emissions occur continuously, the ash plume carried by the wind to the South-West of the archipelago. The residents of the village Plowed, located 28 km from the volcano, reported on air pollution.

In addition, the geological service reported that the volcano’s activity could increase, “anytime”, she will be accompanied by new emissions and explosions near the crater of Kilauea.

Ash clouds have risen to the level up to 3.6 thousand meters above sea level, the report said.

The volcano has been erupting since early may. May 5 in the area of the volcano, an earthquake of magnitude 6.9. Residents of the nearby volcano settlements were evacuated, the lava flows have destroyed at least 30 homes.