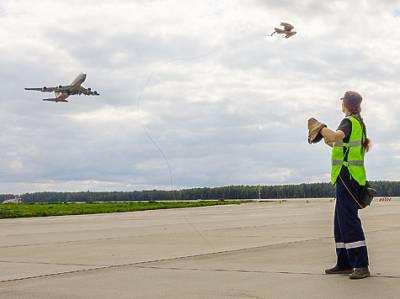 The airspace is not so boundless as it seems. Every year the number of air traffic increases by an average of 4 %, and iron birds seriously are forced to make room for birds alive. To avoid conflicts for a place in the sky and make every flight as safe as possible, many people. And birds.

Aircraft collisions with birds began almost at the same time, when the aircraft. The first documented incidents of this kind took place in 1905 and was one of the Wright brothers. Then in the diary of Orville Wright has a record that during the flight over a cornfield, he got into a flock of birds, much drawsize about the elements of design. And the first crash in a collision with a bird occurred in 1912 in California during a test flight. The aircraft collided with a gull and because of damage to the control wires fell into the ocean, the pilot was killed.

In second half XX century in connection with the sharp increase in speeds and sizes of aircraft, as well as reducing the noise of the engines, collisions with birds has greatly increased. The birds became more difficult to timely detect the approach of aircraft and to avoid collision.

For many it is difficult to imagine how such a small and light creature, like a bird, capable at collision with the aircraft to inflict serious damage. However, calculations show that the impact force of a bird-sized Cup of tea when the flight speed of the aircraft 320 km/h is over 3 tons, and at a speed of 960 km/h is already about 30 tonnes as it increases proportionally to the square of the impact velocity. For example, the impact of birds weighing 1.8 kg (large duck) when the flight speed of the plane is 700 km/h acts on it almost 3 times stronger than the impact of the 30-millimeter projectile at a stationary target.

About 80% of the collisions occurs at altitudes up to 100 meters, on the stages of take-off and initial climb and landing approach, that is directly in the area of aerodromes. Birds, unfortunately, very often nest and look for food near the flying fields. The reasons for this are many. Airfield field usually has good grass cover, which is a free provider of food for birds. And in the summer over the heated concrete surface of the runway birds catch flying insects.

In different countries and airports to reduce the number of collisions with birds are organized by the head of the airport, the head of traffic services, fire brigades or employees of security service of flights. All major airports have special staff positions of ornithologists, who are engaged in the hazing and culling of birds, as well as organize the work of the airport of ornithological support of flights. Armed with dozens of diverse professionals proven techniques. The most widely used bio-acoustic device of the audio system, the losing record of alarm cries of birds and the voices of birds of prey. Alarm scares members of the class of birds (from sparrows to larger individuals) within a radius of a mile from the runway and prevents the accumulation of flocks on the runway airport. The same recording can be heard near some metro and railway stations, where they are used to sparrows and doves did not spoil the facades of monuments.

One of the popular methods of scaring away gas — guns, producing an explosion, the volume of which reaches 150 decibels. Propane scarer is an environmentally friendly and effective means for simulating shots at a specified interval of time. This method effectively deter hunting birds (ducks, geese), especially during their migrations. Also apply a variety of traps, ultrasonic and laser machines, mechanical scarecrows, guns, rocket launchers, ratchet, and even carcasses of dead birds. However, nesting near the airport, the birds manage to get used to the constant roar of engines aircraft and shots gas guns, and even to the disturbing cries of the computer kind. Only the appearance of a living predator makes them panic and forces the devil to fly away. 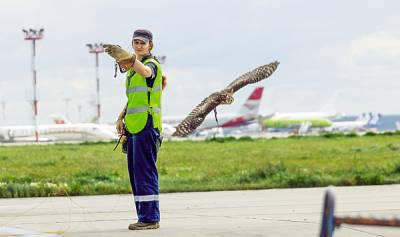 Four Goshawk is the first week of training at the airfield. At certain airfields, the function “feathered patrol” run also Falcon, eagles and owls. Some airports scare birds dogs.

Most birds are afraid of falcons, owls and hawks. Seeing them, they swarm and try to fly higher, and if this is not possible, try to leave the area. At Domodedovo airport the first in Russia began to use the unique hunting patrol birds. Now on guard of safety, in addition to people working 5-hawks teteriatnikov. Two birds are on duty daily during the period of daylight, the rest in the wings. The choice in favor of teteriatnikov done by chance. Falcon, for example, hunting at very high altitudes themselves can become a nuisance to transport. In addition, they are not very interesting small birds that abound around the airport.

Usually Chicks hawk taken from the nursery at the age of 3-4 months and train about one and a half months by a special technique, based on the principles of training used in falconry, adjusted for the specific working conditions at the airport. From the predator does not require daily trapping dozens of feathered violators of the airspace. One of his presence in the airport area enough that the number of nesting birds in the area decreased significantly.

Feathered ornithological service workers are not given names immediately at birth. Only after they prove their mettle, they get nicknames given of some characteristic features or special merit. For example, one of the wards Nicky Ryzhova-Alenicheva specialist ornithological support of flights Domodedovo — called Alarma (аlarm— alarm, alarm), because she is often very loud voice. And the other was named Silva (Latin “forest”). Four and a half years ago she came in from the wild to employees ornithological service at the age of about three months with an injury.

The peak of the work of aviation ornithologists accounts for the seasonal migration of migratory birds and at the time when the young fledglings nesting in the vicinity of the airport, get on the wing. But their work is not limited to working with multiple teterevjatnik. During seasonal migrations, ornithologists are hung in prominent places large balloons with the image of an eye of a bird of prey. The combination of colors and shape they resemble the eyes of a Falcon or hawk — sworn enemies of many birds. The balls are very bright, that in nature has a reputation for a danger signal. The instinct of self-preservation will not allow the birds to approach the ball within sight.

The perimeter of the airport and certain buildings held by various mechanical obstacles: strip curtains, wire design, the spikes on all sorts of towers and poles, preventing birds to build their nests. On ways to feed migratory flights passing close to the runway, put up a small network. From autumn to mid-spring they are often caught partridges. Captured birds workers ornithological services produced in the wildlife sanctuaries and hunting game grounds, thus displacing entire flocks of partridges. Sometimes birds give in hunting where they are used for nataski sporting dog. Or they are food for hawks.

The duties of the ornithological service also includes inspection of the aerodrome and adjacent areas to identify illegal dumps, the organization of clearing bushes and draining wetlands to reduce possible bird nesting, collecting and evaluating information on actual bird situation at the aerodrome, timely warning of dispatchers and crews on the occurrence of bird hazards, training on aviation ornithology with flight crews, etc.
I hope the nearest flight of our readers will still be safer, because now we know we are in safe hands, legs and wings. 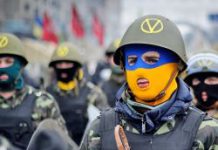 Marvel Comics smokes on the sidelines: “Guardians of the country” return the Crimea

The main thing in “the Movie”: special “routes Cousteau”, “Guardians of the galaxy 2” and other colorful materials movie website

“Logan”, “Guardians of the galaxy 2”, “Arrival” and other best trailers of the week

“Guardians of the galaxy 2”: parse the first trailer for intergalactic action

Guardians of the galaxy return: a new trailer of the new film about the most badass gang of superheroes 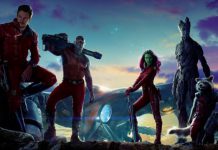 “Guardians of the galaxy 2”: with whom and why will the heroes have to fight blockbuster