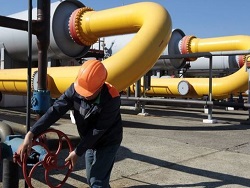 Georgia has ceased purchases of gas from Russia. The Deputy head of the Ministry of economy of Georgia Giorgi Chikovani said that the country’s needs in this fuel covers the whole of Azerbaijan.

“Georgia just don’t need Russian gas, because it is enough for Azerbaijan”, — he explained. Chikovani has also denied the earlier statement of the Georgian opposition that the authorities have no money to buy gas from the Russian company “Gazprom” after Tbilisi and Moscow in the beginning of last year signed an agreement on switching to cash payment for gas transit to Armenia.

In April last year, at the time Deputy Prime Minister and Minister of energy of Georgia Kakha Kaladze said that the country intends to reduce its dependence on Russian gas until the end of the year to abandon the purchase of Russian gas, replacing it with fuel from Azerbaijan. In 2017, Georgia has received 100 million cubic meters of Russian gas in the period up to March, after this delivery was not made.

At the beginning of 2017 Georgia signed a contract with the company “Gazprom export”, according to which the Russian company last year paid for gas transit partly in cash, partly in raw materials, but from 2018 planned to pay for transportation only. Before Georgia received from the transit of Russian gas through its territory to Armenia 10 percent of the total transportation volume. One of the reasons for “switching” of Georgia in the Azerbaijani gas project called the system of pipelines of the southern gas corridor. The project provides for the supply of fuel from Azerbaijan to Turkey and EU countries.