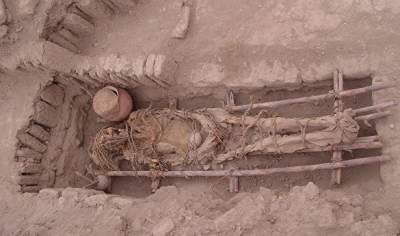 “Resurrection” genome of ancient mummy of America, found half a century ago in one of the caves in the southern United States, have helped scientists to find the ancestors of modern Indians, and to clarify the history of their settlement in the New World. The results of the analysis of her DNA was presented in the journal Science.

“Mummy from Spirit cave and the remains of “paleoamericans” from Brazil was considered a highly controversial findings, since they had the “wrong” shape of the skull, is not typical for Indians. We showed that the counting of pits and bumps on the head can not reveal the true story of people – people with very different appearances can be close relatives of each other,” said Willerslev Eske (Eske Willerslev) from the University of Copenhagen (Denmark).

Quite a long time, scientists believed that the ancestors of the Indians settled in America from southern Siberia and Altai in the course of a single wave of migration that happened about 14-15 thousand years ago. This is supported by the most famous archeological monuments in the territory of North and South America.

The opening of the controversial Kennewick man, more like the aborigines of Oceania and Australia than Asians, and genetic data obtained by Russian and foreign researchers in 2012, made Willerslev and many researchers consider that the ancestors of the Indians migrated to the New world at least three waves of migration. They all occurred at different times and start from different sources.

Representatives of some of these waves, as today the advocates of this theory, extinct in the distant past and not lived up to our days. Judging by the rather “strange” form of the skull, they could belong to a completely different population of people, the so-called “paleoamericans”, has no relation to modern Indians and their ancestors.

Willerslev and his colleagues proved that this theory was partially incorrect, the deciphering of the DNA while the oldest mummy in North America incurred a “natural” way in one of the caves on the territory of the U.S. state of Nevada.

The remains of this ancient people, whose age is about 10.6 thousand years, was found in 1940 in Spirit cave, located near the town of Fallon. The state government has asked two archaeologists, Sidney (Sydney) and Georgia Wheeler (Georgia Wheeler), to conduct excavations on its territory, the soil at the bottom of which local farmers used as a source of fertilizers for their lands.

The mummy of contention

There they found two skeletons of ancient people, wrapped in blankets from the stems of reeds, and the body of one of two of the deceased had to be mummified. The mummy and the remains of a second inhabitant of the cave did not attract special attention of the public and scientists until the mid-1990s, when physicists figured out their ages. It turned out that the couple Wheelers were able to find some of the oldest human remains in America and the oldest “natural” the mummy New Light.

When the opening was leaked to the press, they caused a storm and scandal. Tribes Shoshone and Pautov residing in the territory of Nevada, demanded the return of the remains of the “revered ancestors” for reburial. In response, scientists said that the inhabitant of the cave Spirit could belong to the number of “paleoamericans”, a new group of ancient humans, not directly related to modern Indians.

A fierce debate between the anthropologists and the first peoples of America, repeatedly reaching judicial processes and violent public protests continued the next 18 years, while the representatives of the tribes did not agree that the resolution of their disputes connected Willerslev and other famous paleogenetic.

Promising the Indians that the mummy will be buried in case of affiliation, the Danish geneticist collecting samples of soft tissues and bones of the mummy, extracted DNA and read them. Fragments of DNA preserved in mummies are extraordinarily well – scientists have been able to read every portion of its genome is approximately 18 times.
This allowed his team to reveal many interesting details of the life history and migrations of the ancient inhabitants of America, comparing the DNA of the mummy with the genomes of other ancient inhabitants of the United States, including the first inhabitants of Alaska, Brazil, and Central America.

The brotherhood of Nations

As it turned out, all the ancient inhabitants of the New world, lived in different parts of North and South America about 10 thousand years ago, was a relative of each other and were close relatives of modern Indians.

On the one hand, this discovery refutes one of the main postulates of the theory of multiple waves of migration, their heterogeneous origin. In addition, it questioned the fact that the Polynesian ancestors of the modern Indians of South America could spread to the New world through the Northern migration corridor, the Bering land bridge, as many supporters of this idea.

On the other hand, small but significant differences in the structure of their genomes indicate that almost immediately after moving to America the ancestors of American Indians were divided into three groups. One of them, including relatives of the mummy from Spirit cave, remained in North America, and two others very quickly moved South, colonized the entire New world for one to two thousand years.

Moreover, the representatives of these three groups Indians were not completely isolated. They were in periodic contact with each other and sometimes completely replaced the neighbors, leaving no genetic traces. Something similar, according to scientists, happened about eight thousand years ago, when the inhabitants of Central America have begun to penetrate the South and North, giving life to the “ancestors” of the modern tribes of Indians.