His work has been seen every.

Kitagawa Utamaro – an iconic Japanese artist whose prints are known worldwide. He devoted his life to the depiction of the inmates of the “fun blocks” of maids and geisha teahouses, and created, despite the prohibitions. His name meant “river of abundant happiness”, but the artist’s life was not happy. 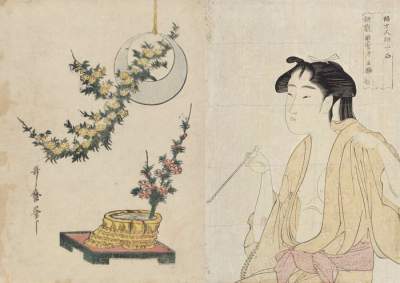 In the Edo period during the Tokugawa Shogunate – about in the seventeenth century appeared an artistic movement that has become a hallmark of Japanese art in the eyes of the Western world.

The term originally meant “mortal world” or “Vale of sorrow”, but prints Ukiyo-e isn’t sad. At that time, life in Tokyo was in full swing: was built those city neighborhoods where flourished the Kabuki theater and located at home of geisha and courtesans. The first artists of the Ukiyo-e depicted the motley inhabitants of these “fun areas”, the beautiful geisha, harsh sumo wrestlers, Kabuki actors with their masks and costumes, but because the word has changed meaning and became to denote “a world full of love.” 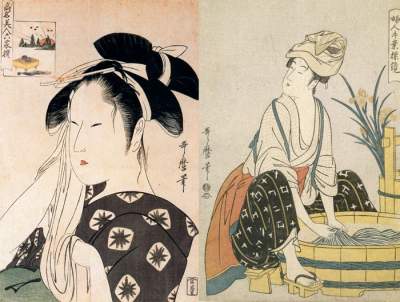 The greatest Western artists were inspired by this “frivolous” the direction of Japanese art. Van Gogh collected prints woodblock prints Ukiyo-e, Whistler (British impressionist) was passionate about them and dressed his models in kimonos… And most of these prints were created by one person. His name was Kitagawa Utamaro, and most of all in life he loved art and women. 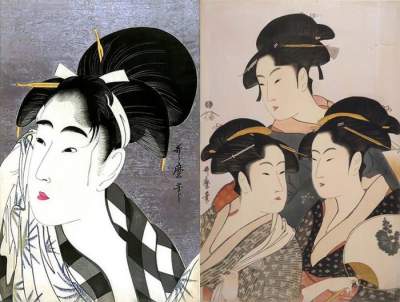 So far it is unknown where and when he was born, no one knows who were his parents. And the name he received at birth was forgotten. To Western ears it sounded exactly the same – Kitagawa, but it was recorded characters meaning simply “North river”. Himself Utamaro (one of his many aliases) preferred to write his name in hieroglyphics, meaning “river abundant happiness.” He was seriously interested in poetry, writing haiku and ironic poems Keck, drawing of Kabuki actors, but became famous for pictures of beautiful women – this genre is called bijin-GA. However, the fascination with literature was not in vain – for a publisher, he did a lot of pictures of plants, birds and insects. 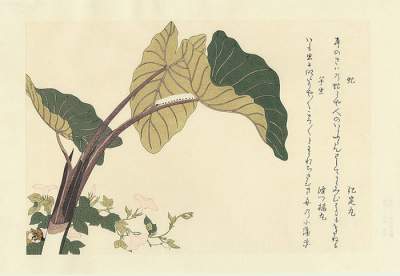 These works are delicate and very detailed, the artist’s eyes close and careful, every detail matters. 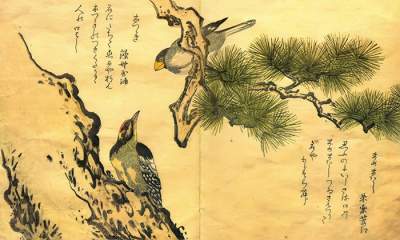 The series “the Book of insects” was kind of unusual – previously, of the master engraving not applied to life as tiny creatures. 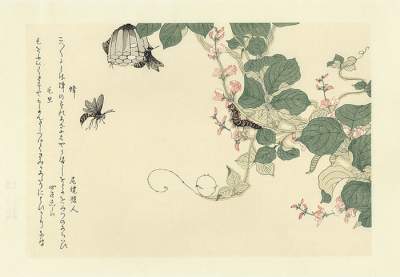 Here Utamaro and enters another small innovation – moving away from the black outline that allows you to make the image as realistic as possible. 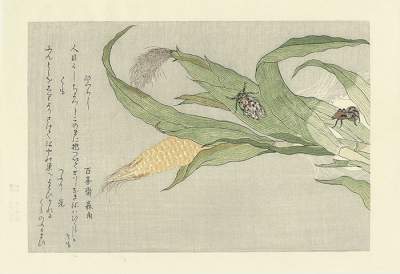 “This is a real heart painting” – wrote about the “Book of insects” by his teacher. 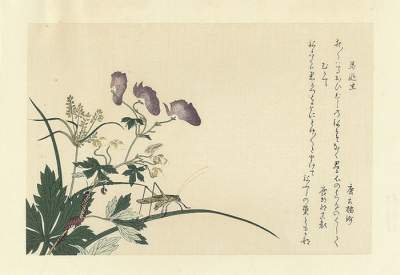 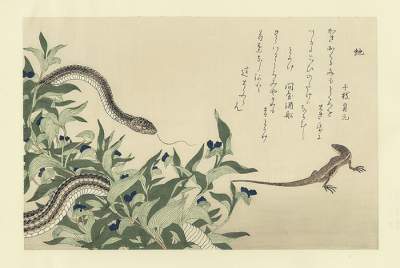 Utamaro never idealized women, despite the tenderness and dignity portrayed them images. He was interested in the real situation and true feelings. 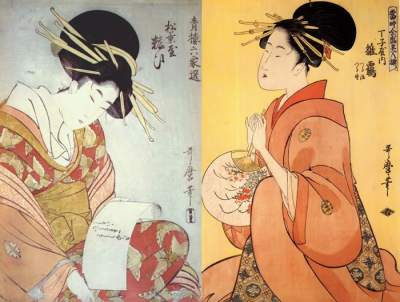 Exploring women’s emotions, he often painted half-length portraits or just a person, although, of course, masterfully knew how to portray the exquisite poses of the geisha while dressing or tea. 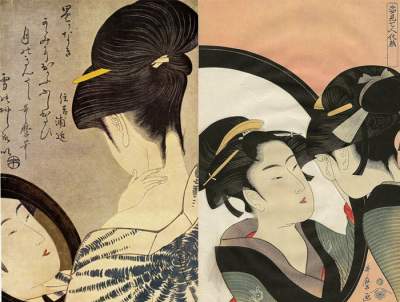 Utamaro often refused from difficult backgrounds to focus fully on the model. Who were those gentle girls, hair in front of a mirror or reading letters on the prints? Not noble ladies – geishas, prostitutes, maids… Prints Utamaro began to be considered is dubious institutions. 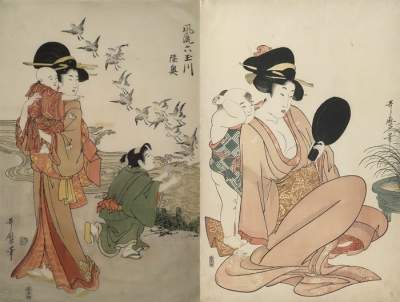 He’s almost never portrayed the suffering of women, the cruelty of their clients, heavy days, although, of course, was their witness (he lived, probably in one of the licensed brothels). Women with his prints, doing makeup, wash, feed the children, sad, meditate, play music, flirt… They are busy with their own Affairs so that the viewer feels like a peeping Tom. They often hide behind the thin curtains, fabrics and screens. 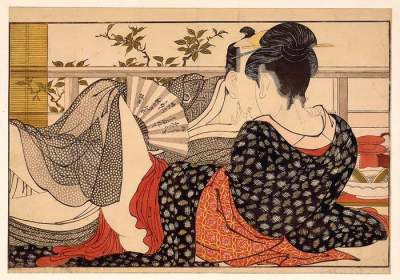 Utamaro owned and engravings of a pornographic nature. Despite the frankness of the stories, they feature smooth lines, the lyricism of color. 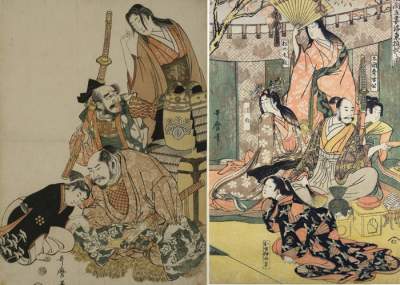 The government of the shogun was considered the work of Utamaro immoral and prohibitive issued one decree after another. But he didn’t care about bans and condemnation. He did not hesitate to encrypt their prints obscene satire on the well-known officials.
However, a bad relationship with the Shogunate and destroyed Utamaro. In 1804, he created the painting-the triptych “Entertainment Toyotomi Hideyoshi and his five concubines, East of the centre of the capital”. Toyotomi Hideyoshi was a major political figure and an iconic figure in the history of Japan. His way was forbidden to use in frivolous prints Ukiyo-e, as well as in theater plays and popular literature. 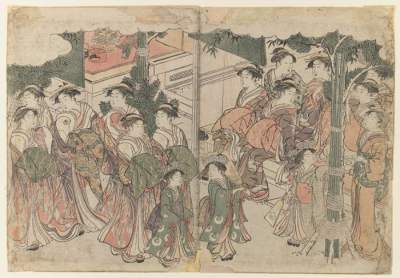 Another controversial work, the Triptych Utamaro was a job where Hideyoshi (his name was changed, but the engraving was the emblem of Hideyoshi) were depicted in hideous form – he sticks to his page, and behind him, the servant harassing women.

Given that the old age Hideyoshi surrounded himself with a harem of 12-year-old concubines, obscene meaning of the engraving was clear to the audience.

These works of Utamaro were intended to be offensive, and the artist was in prison.
Soon, however, he was released under house arrest, but was subjected to terrible for the artist torture – tied the hands of fifty days.
In those fifty days, he turned into a broken, sick person.
However, imprisonment has only added fuel to the fire of his glory. Trying to find oblivion in work, he took one order after another without giving yourself the slightest respite.

Two years later, he died from excessive overwork. He was only fifty-four years.
One of the maids of the Tokyo tea house – Naniwaya Okita, is its appearance of he loved to draw, – washed his body before burial…

Posthumous glory Utamaro incredible. Van Gogh, Degas, Manet, Toulouse-Lautrec and many other innovators and revolutionaries in the field of art bought his prints and had called his teacher. His works are kept in many museums around the world, some of them are not shown to the public due to the extremely fragile pigment inks.