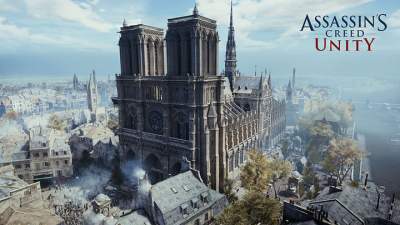 According to the official website of Ubisoft, the company will donate for the reconstruction of Notre Dame 500 thousand euros.

Ubisoft has announced the free distribution of action-adventure Assassin’s Creed Unity’s own digital distribution service Uplay. The action is timed to the tragic events in the Notre Dame Cathedral (Notre Dame de Paris), which resulted in the fire from 15 to 16 April, destroyed the spire and part of the roof and damaged the interior and decoration of monumental buildings.

The staff and management of Ubisoft to Express solidarity with Parisians and people around the world who are concerned about the destruction of Notre-Dame de Paris. The company decided to donate 500 thousand euros for the reconstruction of the Cathedral and asks all concerned to follow their example. In addition, Ubisoft will allow players to experience the grandeur and beauty of the Cathedral, immersed in the adventure Assassin’s Creed Unity. This monument recreated in the game with maximum precision. Designers Ubisoft spent about two years on the study of the Cathedral and its translation into digital form.

You can add Assassin’s Creed Unity to their library Uplay from 17 April to 25 April inclusive.