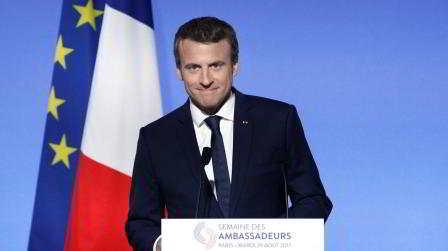 The President of France Emmanuel macron said that he had serious disagreements with Russian President Vladimir Putin on the issue of Ukraine, and assured that he “will not let him get away with it”. Such a statement he made Wednesday in an interview with French newspaper Le Point.

“I speak with everyone. Very directly and very frankly, — quotes its publication. — We’ve had our differences with Vladimir Putin on Ukraine. I stress this point. France won’t let him get away with it”.

In 2014 Russia invaded Ukraine, annexing the Crimea and the occupied parts of Donetsk and Luhansk regions in Donbas. In response, the US, EU and their allies imposed sanctions against Moscow and promised to keep them until the withdrawal of Russian troops from Eastern Ukraine and to return the Peninsula to Kiev.

As the newspaper reminds, at the end of may the Makron was adopted by Putin in an ancient Palace in Versailles.

“The parties then agreed on the need to move forward on such delicate issues like Syria and Ukraine,” says Reuters.

In the meeting that Putin was late for 20 minutes, Makron accused the Russian media of lying and propaganda.

“RT and Sputnik, they spread false information, slander, and I believe that they did not have [the right] to place in my headquarters of the election campaign… They behaved as organs of influence, the organs of propaganda and false propaganda. No more, no less,” said macron.

Then the solution of the Ukrainian question the French leader tied to the reopening of “Norman format”, speaking to the OSCE assessed the current situation and each country party to the Normandy format — clarified his position.

Against Syria he also supported the line of the former administration insisted on democratic transfer of power maintaining the stability.

“We cannot afford to result in the transfer of power again suffered peace citizens”, — stressed the head of France.