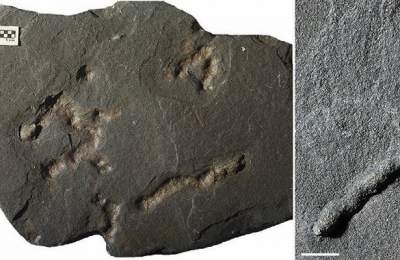 This is the first real animals.

Organisms of macroscopic size, capable of independent movement, lived at the bottom of shallow seas, in place of the current Gabon are 2.1 billion years ago. It is 600 million years before the time of life previous record.

Now is not any confident to say, what was it like and how to construct these animals. Moreover, some skeptics see the found remains of colonies of bacteria and even inorganic education: concretions of sulphur or something like that.

An international team of paleontologists, mainly from France and Canada, who found these fossils near the town of Franceville in Gabon, believes that it is, nevertheless, the first real animals. Scientists have conducted a series of analyses of the chemical composition of fossils, confirmed that the traces of ancient organic matter in them is, and traces of sulphur, however, does not. In addition, the group managed to find several fossils, interpreted as traces of crawling. Probably the ancient beasts moved about as modern slugs, gliding on their own mucus.

This discovery, if it is not in the near future “closed” by skeptics, it means that multicellular organisms appeared on Earth almost at the moment when its atmosphere began to contain appreciable amount of oxygen biogenic origin. This oxygen can be used to breathe and live happily ever after – oxygen respiration yields much more energy than used to it anaerobic pathway.

It is significant however that the Gabonese multicellular, apparently, soon died, leaving no direct descendants. No paleontological or genetic traces of such in the subsequent history of the earthly life are not traced.