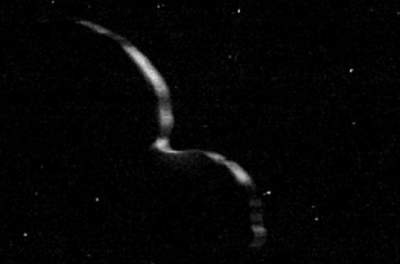 Part of the object was similar to “pancakes”.

The apparatus of the New Horizons transmitted to Earth new images of the object in the Kuiper Belt 2014 MU69 or Ultima Thule, which he did after a flyby of the object 1 January. As reported on the website NASA analysis of these images showed that the shape of the object was not, as originally intended.

Ultima Thule consists of two parts connected by a bridge that revolve around a common center of mass, not merging with each other. After receiving the first data about the object, scientists believed that it resembles a skittle bowling alley or a snowman. The new images show that the share of object was flat, unlike the sphere.

“Most of the so called “Ultima” is like a big pancake, but smaller, “Tula”, reminiscent of a flattened walnut” – the researchers note. New pictures were taken at the time when the machine flew for a distance 8862 kilometres from the Ultima Thule.