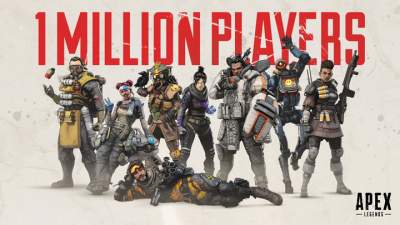 The game was released on major gaming platforms, including PC, PS4 and Xbox One, and is distributed on a shareware model.

The day before yesterday, Electronic Arts suddenly introduced multiplayer Apex Legends in the genre battle Royal made based on the universe of Titanfall. The game was released on major gaming platforms, including PC, PS4 and Xbox One, and is distributed on a shareware model.

Tellingly, thanks to free-to-play project got a great start over the first eight hours of the game recorded over 1 million unique users, per day, this figure rose to 2.5 million Peak simultaneous online users at the same time was more than 600 thousand people.

Despite such high numbers for the first day, the developers were ready for such an influx of players. Journalists noted the stable operation of the Apex Legends and no problems with connecting to servers or finding games in the lobby, with the exception of rare errors (DXGI_ERROR_DEVICE_HUNG NVIDIA) on Nvidia graphics cards when using the latest drivers.

Now, before Electronic Arts and Respawn Entertainment is not an easy task to develop and consolidate the achieved success. If all goes without a hitch, by the end of February Apex Legends may count on 5 million player base with the peak online up to 1 million users.