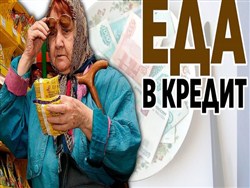 The retail trade sector in Russia, apparently, has not overcome the crisis. This is especially true of the food trade, the turnover of which is below pre-crisis levels by almost 7%, follows from materials of the Center for macroeconomic analysis and short-term forecasting (CMASF). Retailers will come up with new approaches to attract demand. According to experts, one of the novelties in the sale of food in installments. Soon this “service” can become massive due to the falling incomes of the population, experts believe.

Now it’s lagging by about 3% from the average monthly values for 2012 (eliminating seasonality). Retail trade turnover of food products, beverages, tobacco products below the monthly average for 2012 of 6.6%. In the case of food products it is only slightly exceeded pre-crisis level of 0.5%. Such data results in their study says.

“In the second quarter of 2019 continued slowdown in consumer demand in the face of persistent weak dynamics of incomes of the population”, – reported earlier the Ministry of economic development. “The growth of retail turnover in the second quarter of 2019 continued slowing in annual terms, mainly due to food products”, – specified in Department Maxim Oreshkin.

Retailers have to adapt to years of consumer crisis. “In the best position are now a large trading network, which has a big product line – said “NG” Director of the Center for market studies Higher school of Economics Georgy Ostapkovich. They have the ability to apply a variety of promotions, bonuses, discounts. They adjust for falling demand as you can.”

There has been a trend, which, according to the expert, was not there before. Retailers are now trying to influence all buyers: not just for the high – and middle-income, but low income. It is expressed in “the game” with the prices shops can greatly increase trading margin on commodities, and to compensate for this due to higher margins on premium goods, alcohol, etc. “However, it is the prerogative of networkers. Small shops can’t do that, they have less room for maneuver,” – says Ostapkovich.

“Today, the buyer is heavily dependent on promotions, resulting in a network outlet up to 80% of the assortment may participate in actions, whereas a small retail and small networks such marketing is actually not available,” – said “NG” Director of development Association of retail stores Gregory Pavlov. According to him, retail is “playing with price segments”. She also tries to expand the range by introducing new own brands.

“Forms and methods that outlets can encourage buyers, there are more than a dozen, including the price (temporary price reduction on certain items), motivation (different remuneration system for the purchase: loyalty cards, prizes, coupons), advertising (dissemination of information about the product or promotions), active promotion (demonstration of goods, tasting), etc.,” he listed, “NG”, the press service of the Association of companies of retail trade.

“Coupon promotion and credit – two key engine of trade”, – said a member of the chamber of Commerce Anna Vovk. According to her, “may not always promotions save”, but to consumers it is easier to make purchases in a falling income.

“The purchase of durable goods, for example household appliances on credit has become a common phenomenon, continues wolf. – The more that retailers negotiate about partnership programs with the banks and give discount on the quantity of interest, thereby converting the loan in installments.” But to this should now add a new trend: credit, or, more precisely, the installments being implemented in grocery retail, says wolf.

“Retailers have started issuing cards to pay for goods in installments, says senior strategist at branding Agency DDVB, Dmitry Komarov. – At decrease in incomes such cards can provide the purchase of goods of daily demand”.

This mechanism is food in installments – “may be more popular than now, if we continue the trend of increasing the share of the population with incomes below the subsistence minimum,” said associate Professor of Russian economic University Svetlana Kazantseva.

The economist notes that the installments will have sometime to give, “respectively, will be running a chain of constant shortage of money”. Because, relatively speaking, today people will be able to pay for purchases made yesterday, but in the conditions of falling of incomes, they again will not have enough money for current consumption.

Meanwhile, as suggested by the Director of the company “Euroexpert” Catherine Sinogeikin, food in installments can become “an instrument not so much to stimulate demand and growth in sales, how much of the competitive struggle” of the retailers. Thus, according to the expert, the more likely consumers would buy in one-time installments that could not afford before, but they will not be using this service constantly. How, in turn, says Vice-President of RFI, the Bank’s Elena Chizhevskaya, the mechanism of “everyday goods” is not so exotic, it is used also in other countries, writes the Independent newspaper.