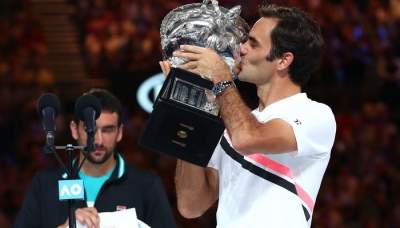 Swiss tennis player Roger Federer for the second season in a row became the winner of the Open championship of Australia.

In the final of the Australian Open Federer is the heavy pyatisetovy match beat Croat Marin Cilic, who came close to revenge for the defeat at last year’s Wimbledon, but in the debut of the final party missed your chance.

At the start of the match, Federer quickly made two breaks and easily took the first set. In the second set Cilic steadied their game and began to have favorite serious resistance. With the score 4:5 Federer on his serve played a set-bol, but at the tiebreak allowed Cilic to level the score.

The fate of the third set was decided by a single break Federer in the sixth game. During the fourth game, the Swiss were leading 3:1 but failed unexpectedly five games in a row and questioned his next triumph in Melbourne.

In the opening of the decisive set, Federer played two break-point. Cilic lost pressure and stopped to show my best tennis – Federer instantly took advantage of the downturn in the opponent’s game and never gave the Croatian a chance.