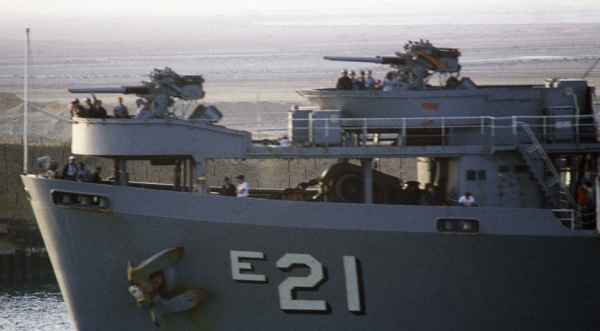 The fight between Tehran and Washington joined in Cairo.

Egyptian riot police, according to OilPrice (RR), citing Arabic news site Al-Araby Al-Jadeed, captured in the Suez canal Ukrainian tanker, which was carrying Iranian oil. This is the second in two weeks, the arrest of the tanker with oil from Iran. Moreover, the arrest happened a week and a half ago, but it became known about it just now.

Much more sensational was the case last week. Then in Gibraltar, British Marines seized the supertanker Grace 1, who was transported to Syria oil from Iran. Its decision to detain Grace 1 London explained the existence of “serious reasons” to believe that it violates EU sanctions against Syria.

Supporting documentation, which had the opportunity to see the correspondents of Reuters, suggests that the tanker route to Syria, loaded in the terminal on the coast of Iran Iranian oil.

The first of the two

Regarding the second shipment of Iranian oil, who was detained by the Egyptian authorities, the message about his arrest followed the next day after an Egyptian court sentenced the Professor of Cairo University of al-Azhar and five others accused of espionage in favor of Iran. Professor Alaa Moawad was sentenced to 15 years in prison and a fine in the amount of 30 thousand dollars, and five other defendants who were not present in the courtroom, was sentenced to life imprisonment.

Relations between Iran and Egypt leave much to be desired and without incident with the tanker. Cairo, for example, supports the actions of the coalition headed by Saudi Arabia in Yemen against the Houthis, who are supported and armed by Iran.

If the detention of the Ukrainian tankers with Iranian oil are confirmed, there will be reason to say that the US fight with Iran has entered a new stage: the stage of detention of American allies, and — certainly on the basis of information supplied by US intelligence, specific ships with specific Iranian oil, from the sale of which will largely depend on how Tehran will be able to survive under the very harsh economic sanctions of Washington.

Tehran has already hinted how he might act in this situation – threatening retaliatory measures of great Britain. It is not surprising that the foreign Office has warned all British ships in the middle East and especially the Persian Gulf, the need to exercise maximum caution in light of Iranian threats.

It is not excluded that the same measures Iran might take in relation to the Egyptian ships and ships of other countries who want to follow the example of London and Cairo.

Of course, a mirror response in this situation is the simplest reaction, but it can lead to confrontation with Iran and other States. Just creating an anti – Iranian coalition led by Washington, is now struggling to achieve the United States.