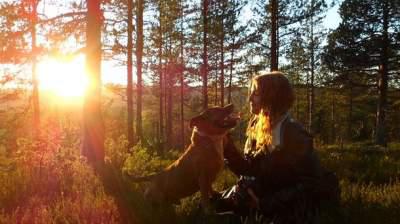 Dogs can make a person to understand the meaning of their barking or growling. And women understand dogs much better than men, found in the University of Eötvös Loran in Hungary.

During the study, the researchers monitored 40 volunteers who listened to the roar of the 18 dogs guarding their food.

In the experiment, the participants were able to correctly classify 63% of the samples the “dog speech”.

The most human-readable was “playful” growling dogs – they understand 81% of the participants. And worst of all was the case with the aggressive sounds associated with the protection of food or meeting with a stranger.

However, scientists were surprised by the ability of women to clearly define the mood of your pet in his roar. Perhaps this is due to the fact that a playful growl is different from the aggressive pace and tone.

In addition to the definition of context sounds the study participants also had to evaluate the growl on the emotional scale, determining the level of aggression, despair, fear, happiness or playfulness. The context, however, has had a “significant” impact on reading emotions of a dog.

The study scientists concluded that dogs are trying to tell people about your mood or even the intentions. At the same time they can manipulate some of the key parameters of its growl for overly aggressive or playful expressions of emotions depending on the context.