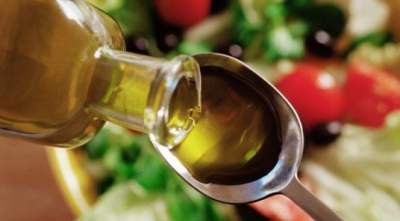 And here’s another reason to stick to the Mediterranean diet. Experts in the field of healthy nutrition found that only 4 tablespoons of olive oil a day help enhance the positive effects of “good” cholesterol.

Mediterranean diet helps people to reduce the risk of cardiovascular diseases, as has been scientifically proven. Now researchers have discovered that containing a large amount of olive oil food products increase the positive impact of the so-called “good cholesterol” – high-density lipoproteins. To achieve this effect it is necessary to get at least 4 tablespoons of olive oil every day. This will help prevent the pathological process of the formation of atherosclerotic plaques in the arteries, which can lead to heart attack or stroke.

However, olive oil does not help to lower “bad” cholesterol – low density lipoprotein, which is also a risk factor for stroke and heart attack. Researchers from Hospital del Mar Medical Research Institute, Barcelona gained their own conclusions based on observations of the health and nutrition 296 people with an average age of 66 years who were at increased risk in connection with risk of developing heart disease. All the volunteers were divided arbitrarily into three groups depending on their food type.

Someone who followed the Mediterranean diet with purified olive oil, someone- the same type of food with extra amount of nuts, and someone just used “healthy” control diet. In the latter group have received less red meat, processed foods, and fatty dairy products and sweets.

At the beginning of the study and after its completion all the participants were taking blood tests for the presence of two types of cholesterol. It turned out that none of the diets did not increase the content of “good” cholesterol, but both of the Mediterranean diet improved the impact of the cholesterol. In volunteers who received extra virgin olive oil, the effect was maximum.