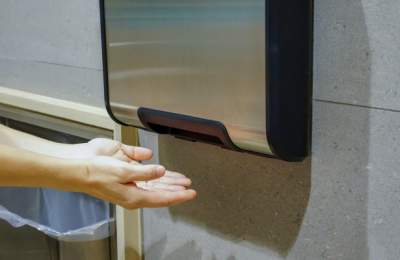 After going to the toilet on the human skin remains a lot of germs.

Of course, each of us, after visiting the toilet in a public place, carefully washes his hands. But after using the devices for drying the hands, which are installed in most restrooms, all of our efforts to protect itself from possible infections, are negated.

After going to the toilet on the human skin remains a lot of germs, which, alas, not all disappear even after thorough hand washing. The air of modern hand dryers that are designed to remove remaining moisture from your limbs, produced at a speed of about 400 m/hour. They are quite capable, in simple language, to blow the remaining on the palms mikrorganizmy and leave them in the air.

Bacteria remaining after human use of jet hand dryer, can easily “migrate” on the palm of the next person who decides to use “automatic towel”. This is confirmed by the research team of the University of Leeds in Britain.

Meanwhile, the scientists claim that the bacteria are concentrated not only in the hand dryer, but at a distance of 1-2 meters around her. It is noted that about 50% of germs, airborne dryers in the air, stay there for about 20 minutes.