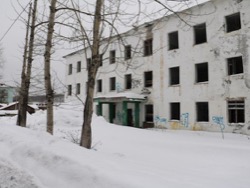 The Russian far East continues to empty. According to Rosstat, from January to December 2017 in DFO was born 74 thousand 573 baby. In 2016 Dalnevostochniy produced 82 thousand 829 children. In the red, thus, 8 thousand of 256 newborns in the far East.

The most common cause of death in the far East in 2017, as well as in 2016, was cardiovascular disease.

Total in Russia the birth rate in 2017, according to Rosstat, declined from 10.7%. The far East compared to other regions of Russia demonstrates the most sad picture.

In the macro-region’s demographic problems continue since the early 90-ies of the last century.

Worst of all the “dashing 90-e” walked the island.

For example, once a city of Dzerzhinsk has lost in the past years, 55,3% of the population. How, in fact, the status of the city. The main enterprise here was mine. But in 1997 the mine was closed. Along with the mine actually “died” and the city.

Fishing in Sakhalin Nevelsk lost 55.8% of the population. To all the troubles that brought the city the 90s, added a strong earthquake in 2007.

Sakhalin Chekhov since the collapse of the Soviet Union had lost 60.3% of the population. Once Chekhov was a city here based large pulp and paper mill, which in 1922 was built by the Japanese. In the 90s the plant was mothballed, and then completely ceased to exist. Then, one by one, closed and other enterprises.

63.5% of the population lost after the Soviet collapse Chukchi Pevek. In the 90s, tin mining, feed hundreds of people for decades, was discontinued. The city is empty.

64.1% reduction in the population of Bilibino Chukotka. There is working Bilibino NPP. But it may close in 2020 when the next will begin to operate floating nuclear power plants. And then Bilibino empty at all.

Kolyma Susuman lost or 69.3% of the residents of the gold reserves at the mine were depleted, business left, and behind him the people left.

It — if to speak about cities. And how in the DFO empty for the last 2.5 decades, the villages — do not count. Almost deserted former village of miners Canada in the Khabarovsk territory. The same can be said about the once a major railway junction high mountain in the same region.

Sakhalin regional Duma drafting the law on resettlement of inhabitants from the “dying” villages — in many localities there are only a few people.

The far East were deserted in the 90s and continues to empty today.

Hope the influx of migrants from countries of the former USSR did not materialize. First, the regional authorities annually reduce the number of industries in which you can work migrants — in order not to lose completely the indigenous population.

For example, on Sakhalin authorities have once again significantly cut the list of occupations in which can work migrants. Plus — should not be discounted ethnic crime, which bring immigrants from the former Soviet Union.

Besides, the migrants themselves are losing interest in Russia — work was substantially reduced.

As reported IA REGNUM, the bleak statistics of fertility in DFO complements and continued outflow of the population from the region. Proposed by the Ministry for Far East development measures to improve the demographic situation — far acres and a million coming in DFO employee — can cause confusion among the locals, and only increase the Exodus. Among the reasons why the far East leave their homes, often hear such as low wages, very expensive “communal”, very expensive food, the inability to make a career, harsh climate, expensive gasoline, expensive travel, making many unavailable in the far East vacation. The situation is illogical. Authorities declare that plants need in DFO personnel from the West, because its not enough. But at the enterprises of the far East increasingly are reducing. And the region has many higher and secondary educational institutions that could train the necessary specialists from the local community.

In Kolyma 20 thousand people dream of leaving the region under the program of resettlement from the far North. But the line moves very slowly in 2017 could move only 74 people.

Krasnodar media not long ago published article, which reported that the region is literally choking from the influx of far Easterners and Siberians.

In order to find out how effective measures of attracting people from other regions in the far Eastern Federal district, proposed by the Ministry for development of Russian Far East, REGNUM news Agency is conducting a survey of residents of Russia.