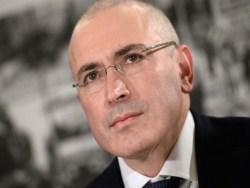 Mikhail Khodorkovsky declared in the international search. What follows from this? Another peal of laughter in the world?

For such queries our intelligence services already and do not react. Ilya Ponomarev, the Russian Federation is also searched with a lantern and a dog, calmly goes to different countries, same goes for Mikhail Khodorkovsky and all other opponents of the regime. Well don’t pay more for all these terrible circulars from Russia to world attention.

And not only because their involvement is obvious.

Just if you are in the centre of the capital, killing the opposition, if the Chechen police guards attacking politicians in the middle of the city, and her, apologizing, letting go — then what kind of legitimacy can we talk?

Yes, in Russia it is possible, as we can see, with impunity to kill any person. You can easily take away business, to bend the bucket “statement of ownership” — not a problem. But do not expect that our (yours, the people it has no relation) the courts and other law enforcement agencies will be any other relation except a Homeric laughter. In fact, Mikhail Khodorkovsky exactly the same thing: “How did not pay attention to it, and never will”.