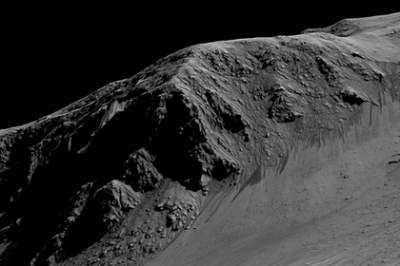 Experts found a problem while searching of hydrated perchlorates on maps of Mars.

Scientists at Caltech (USA) came to the conclusion that due to improper processing of data obtained interplanetary station Mars Reconnaissance Orbiter, the apparatus erroneously recognizes the presence of hydrated salts on the red planet. Thus, some areas on the planet where previously it was assumed the presence of water, are in fact completely dry and lifeless.

Experts found a problem while searching of hydrated perchlorates on maps of Mars, based on the information obtained by the spectrometer in the visible and near-infrared radiation (CRISM). Perchlorate lowers the freezing point of water at 80 degrees Celsius, making possible the existence of liquid water in the Martian atmosphere. The existence of perchlorates on Mars are also known due to the spacecraft Phoenix landing on the surface of the planet and the Curiosity Rover.

The presence of minerals on Mars, scientists are judged by the reflection of different wavelengths from the surface of the planet. Chemicals in a special way absorb and reflect light. However, the CRISM camera does not always correctly, with the result that it detects reflected light spots where they should not be. The algorithms for correcting such mistakes, sometimes make dips in the spectra at the same wavelength as the perchlorate. Scientists have written an algorithm that allows to identify on the maps of CRISM small deposits of perchlorate, and the program has revealed the widespread presence of salts on the surface of Mars, including where there were no conditions for their formation.

Now scientists are working on a more accurate method for the recognition of perchlorate, which is based not only on spectral data. According to researchers, perchlorates still present on Mars, however, it became clear that they are much harder to detect than previously thought.