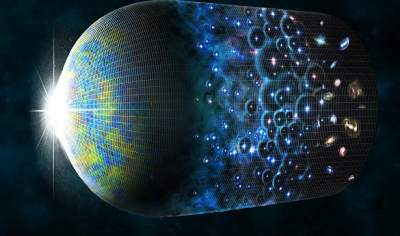 Ultrafast cooling of visible matter of the Universe and unexpectedly early formation of galaxies and stars, opened recently, can be explained by the fact that dark matter has a very weak but non-zero electric charge, say astronomers in an article published in the journal Nature.

“We found that dark matter particles may have very small electrical charge, which is about a million times smaller than that of the electron.

Such a paltry charge, it is impossible to detect using the LHC and other particle accelerators. On the other hand, the radio signals caught by our colleagues during observations of the young Universe, they say that they can exist,” said Abraham Loeb (Abraham Loeb) from Harvard University (USA).

In late February of this year, astronomers announced a stunning discovery — they were able to fix the traces of stars, who lived in the Universe, approximately 180 million years after the Big Bang.

This discovery has generated a lot of fierce debate among cosmologists and astrophysicists. The fact that the modern theory describing the emergence of the Universe do not allow for such an early birth of stars 200 million years ago it was too “hot” to the inside of it could be a sufficient amount of hydrogen molecules that were able to form dense clouds of gas and light.

In reality, according to observations from the Hubble space, the temperature of the Universe at that time was approximately two times lower than predicted by the theory, which allowed the stars to emerge almost immediately after the birth of the universe and make it clear limits in record time. Why this is so, scientists do not yet know, and some of them doubt the results of these measurements.

Loeb and his colleague Julian muñoz (Julian Munoz) found an explanation for this anomaly by assuming that dark matter behaved in the distant past, not like today. Part of its “atoms” as the scientists thought, could be similar to the ions of normal matter, and have partial positive or negative charge.

In this case, as the calculations of cosmologists, “modern” dark matter will behave approximately the same as observed for the closest galaxies, but it is quite different to affect matter in the early days of the Universe.

Even if “charged” dark matter would have an extremely low charge, the electrical interaction with protons, electrons, and other particles that existed before the birth of the stars had much to inhibit them, causing them to move slower. As a result, the universe had to cool down much faster than predicted by the classical cosmological theory.