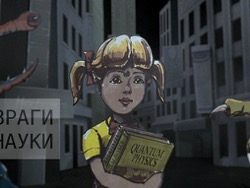 “Cook with your own shit, and I’m sick of it too, the Russian science with a cart — the Mare is easier. The freed resources I will direct your research.

As they say in Russia: all the best, good mood, good health and most importantly of Orthodoxy more. The project is likely later will continue to work, but without you.”

With these words, on the territory of the Russian Federation were denied access to the popular in the scientific community to the website Sci-Hub.SS. (link for bypass website blocking)

The project was founded in 2011 to facilitate scientists and students around the world access to new research. For 6 years on the resource collected more than 64,5 million scientific articles and other publications.

In 2015 the Dutch publishing house Elsevier (Elsevier) filed a lawsuit in an American court as he faced losses after the launch of the Sci-Hub, and won it. Now the founders of the project needs to pay the company $ 15 million.

In 2016, the founder of the Sci-Hub project Alexandra Elbakyan was in the top 10 most influential people in the science magazine Nature.

Now the fun begins. Recall that the main objective of the project is to combat inequalities in access to knowledge around the world. The creators advocate for the abolition of intellectual property or copyright laws for research and educational resources. Sci-Hub supports the Open Access movement in science, that is, all studies should be published in open access.

What happens if Alexandra Elbakyan has neglected the main idea of the project and shut down access to your project on the territory of the Russian Federation?

According to Elbakyan, in the last two years against her led to the persecution of the “so-called Russian “liberal opposition””.

The last straw was the “trick” of two scientists from Russia and Mexico, who have named a new species parasitoid insect riders in her honor – Idiogramma elbakyanae. One of the authors (Junior researcher of the laboratory of insect taxonomy Zoological Institute RAS Andrey Khalaim) considers it a manifestation of respect for Elbakyan.

I guess the reason for such action was the conflict of the founder of the Sci-Hub with a senior staff member of the Institute of information transmission problems RAS named after A. A. Kharkevich Alexander by Peninim.

Alexandra Elbakyan believes that the work of Sci-Hub has brought the scientific community a lot more good than Panin. Here are some excerpts from her article:
1

As You may remember, the Foundation “Dynasty” was included in the list of foreign agents, and then eliminated. Can this be considered a revenge Fund eliminated in 2015 or is it the root of the problem Sci-Hub is “pirated content”? Maybe You also think that all scientific work should be freely available?

By the way, I recommend to read with a shocking surprise for the students and their parents.