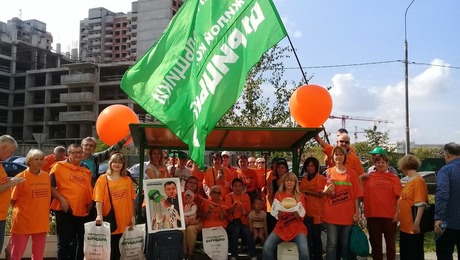 In mid-August, the Moscow authorities through the website of Moskomstroyinvest themselves have already promised to hand over seven buildings of the residential complex “tsarina” by the beginning of September. At the appointed day the shareholders of the company came to these buildings with things and even with a loaf for the builders. But…

The hopeless life of the deceived shareholders capital brighten rays of hope, they from time to time sends the Moscow government. People, of course, would be better if the keys in hand… – the second dozen years of waiting. But so far appeared only official page of Moskomstroyinvest in “Vkontakte” where advertised “the most truthful and reliable news” from the city strojkompleksa. So, anyway, says “cap” over the news.

Subscribers, among them a good half of shareholders who eagerly caught every word of truth, sometimes not even knowing what they were playing snap. But grated fighters from the infamous LCD “Tsaritsyno” when it came to them, took and checked.

– In August, the Moskomstroyinvest announced the great event which we have been waiting for almost ten years – said “NO” the member of initiative group of shareholders Elena Godlevskaya. Literally each iron was made: “the first seven buildings of the 1st stage of the residential complex “Tsaritsyno” will be completed before September. Media happily picked up the news and carried on the Internet. They echoed the true Vkontakte page: “the Corps will pass! September 1, you need to hold a creditors ‘ meeting and to vote for handing over the keys.” We have on the site, nothing there reminds you of surrender, but rather every indication that nobody is going to take. But if the information comes from official sources, investors to date arrived to witness the surrender of the buildings.

Here is direct profit – with flags and loaf, who had nowhere to live – came with suitcases in order to have something to leave in a new apartment, albeit without finishing. On the eve of the reception of the President’s office gave an official invitation to the head of state Vladimir Putin at the ceremonial receiving of the key participants of shared construction .

– Heavy 10 years of waiting, wandering around strange corners, exhausting struggle, and finally first success, we wanted to make the President happy with us, explains Godlevskaya visit investors in his waiting room. – We generally list the distinguished guests and all who helped us on the difficult path and brought before the keys are very big. First on the list is the author of 214 FZ resin – part a relative who is under arrest our developer Pinkevich. Not forgotten staff of Moskomstroyinvest Timofeev, beardless, potters, Pyatov, supervise the construction, – with the acquiescence of the funds shareholders was stolen. Would be glad to see the Chairman of the investigative Committee Bastrykin, which revealed the corruption octopus and instigated a criminal case №11802007706000067 on the fact of abuse of authority of employee data. Heartily invited to the General Prosecutor Chaika, closed the criminal case because his office does not have found in robbing shareholders of any violations. Sent invitation to the Minister of the interior Kolokoltsev, as well as the Prosecutor General, to excite criminal case on the fact of theft of funds of citizens. And of course we sent out invitations to many media, to enable them to see the scope and success of authorities in addressing the problem of defrauded co-investors, to cover a solemn ceremony on handing over the keys and tell everyone how firmly the word of the Moscow construction complex.

No one came. Real estate investors sat on their suitcases at his unfinished LCD and went – wait, what else can please them the Moskomstroyinvest. Except, of course, the game snap. Second time this game will not work.