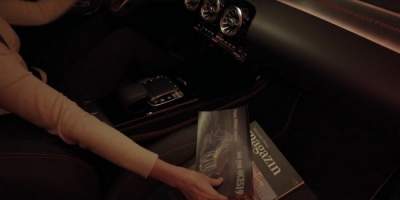 The car will unveil at the consumer electronics show in Las Vegas.

Through active teaser campaign Mercedes has released a video showing the interior of the new version of the CLA, whose debut will take place on 7 or 9 January during CES in Las Vegas.

Advertising campaign, Mercedes-Benz CLA second generation is in full swing, and ahead of the official debut scheduled for next week, was shown a new video. The car will unveil at the consumer electronics show in Las Vegas, is increasingly attracting the attention of automakers. Now we were shown a video showing part of the interior and technology.

So, we were shown the special function “wizard interior”. If simple words, I was shown a system using motion sensors, which includes the interior lighting with movement of the driver’s hands. No details, but it is logical to assume that the function will only work on a parked car.

The upper part of the dashboard on the passenger side has the logo “Edition 1”, this means that we consider a limited edition CLA Edition 1 which will be sold only during the first 12 months. As in other models with a similar index (A-Class Sedan Edition 1 and GT S Edition 1 63), the series will have better equipment and lots of personalization options.

In addition, CES was selected for a debut that would focus on corporate MBUX complex that is actively developed and gets new features.