The next presidential elections in Russia will take place the day of the “annexation” of the Crimea. Annexation of Ukrainian territory – a dubious argument for the mobilization of the electorate. The Peninsula ceased to be of interest to the population of Russia. Now he is associated with routine, political vanity, and rising maintenance costs that are shifted onto the shoulders of ordinary Russians.

The topic of the annexation of the Ukrainian Peninsula will not be decisive in the next presidential elections of Russia. This opinion was expressed by Professor of comparative politics at the Moscow Higher school of Economics Sergei Medvedev.

Propaganda all the time looking for a great theme for promotion. In Crimea, in this sense of privilege there, it turned into a neutral asset

“Crimean champagne already exhausted. In my opinion, this build campaign, no one will. There are reports about the construction of the bridge, on the celebration Day of the Navy, about something else, but this is nothing more than a ritual dance. His place later occupied the Donbass, then Syria, then obsessive friendship with Donald trump, will continue to be North Korea. Propaganda all the time looking for a great theme for promotion. In Crimea, in this sense of privilege there, it turned into a neutral asset”, – said the expert.

Moscow scientist exactly caught the trend. The next presidential election in Russia appointed to the day of “annexation” of the Crimea, but significant impact on the electorate of this event has not already. Stolen the Peninsula is not interesting to the population of the country. The euphoria of “Krymnasha” began to fade after the first year of annexation. Now the Russians are primarily concerned about rising prices and poverty, rather than dubious geopolitical achievements of the government. The main question – what does this mean for residents of Crimea? From the point of view of the Russian political class, the Peninsula ceased to be “sacred territory” from which you want to sculpt some kind of showcase the new Russia. The abolition of the “Crimean Federal district” marked the end of the honeymoon period between the Kremlin and the inhabitants of the Peninsula. Crimea is gradually turning into the dead of the province, the raison d’être of which is to maintaining a huge military base.

Life on the Peninsula since the occupation have deteriorated markedly, recognize that even the most rabid “Russian patriots” from Sevastopol

The closer the election of the Russian President, the more PR and show off in the Crimea. Providing Peninsula, ostensibly raising living standards, upgrading infrastructure, attracting investment, creating new jobs and increasing the wealth of the population exist only on paper and in the imagination of the local “authorities”. Formal wages increase, but real incomes in this fall. Life on the Peninsula since the occupation have deteriorated markedly, recognize that even the most rabid “Russian patriots” from Sevastopol. Protest moods grow in region, but to speak out against the “power” population is not at risk. Rallies and pickets is an extreme measure, and only in the case that the occupying “authority” intends to take away the last people.

All three years, Moscow and its proteges “developed” the Crimea only on TV, not deciding any one of the strategic objectives. Water on the Peninsula is not given, a full bridge with the Kuban is not built, the much-vaunted Russian prosperity has resulted in rising prices and falling incomes. Decent wage salaries can boast of only the military, the security services, the police and the heads of budget organisations. The rest of the Crimeans have to settle for 12-15 thousand rubles a month. And all this against the backdrop of the inability of the “authorities” to provide minimum household amenities.

The much-touted upgrade of the technical infrastructure was the usual PR campaign. Recently, Russian officials announced interesting news: the objects of the power bridge, launched by President Vladimir Putin, functioning in the mode of commissioning. We are talking about the construction of several substations in the Crimea and on the territory of Kuban and the laying of two high voltage lines: for the Russian territory and the Peninsula. In the Russian Ministry of energy assured that these objects complete work in December. Roughly speaking, informed through the Strait paved only power cable, pump “run” it, President Vladimir Putinsaid about “energy independence” of the territory, while not all technical facilities were ready for operation. It is quite natural that in the summer of “energy bridge” could not resist high loads and broke. Although the “power” to convince the Crimeans that the power was enough and even has a surplus of energy.

The President Of Russia Vladimir Putin

As practice shows, the Russian authorities can not bring to mind anything. Why the Kerch bridge should it be any different?

With the notorious Kerch bridge will be the same. At the time of delivery of object in operation will host a Grand PR show. Putin solemnly cut the red ribbon. The Kremlin leader and his chosen “authorities” of the Crimea will say lots of big words about “reunification” of the Peninsula with Russia, the great achievements of the country-occupier, the improvement of life in the Republic, the fall in prices due to the solution of transport problems and the like. As soon as the loud fireworks, impose restrictions on travel across the bridge and occasionally it will be closed for technical work. As practice shows, the Russian authorities can not bring to mind any object: “energy bridge” to Crimea, the stadium “Zenit arena” in St. Petersburg and the Vostochny cosmodrome, which is continuously shaken by scandals. Why the Kerch bridge should it be any different?

Moscow, without being able to provide the Crimea the minimum benefits of civilization, including “the idiot box” at full volume. The topic of social well-being finally replace the mobilization of Patriotic rhetoric and the cult of the besieged fortress. Full life Crimeans now does not promise. “Enemies are everywhere!” –the only slogan that “government” can offer the public. If Putin will not be able once again to “sell” to the electorate of Crimea, he will “sell” political instability in Ukraine trying to destabilize the situation in Kiev for regime change. The Kremlin can not abandon the theme of Donbass and Syria. Otherwise, you will have to speak with the public about the state of the economy, the crisis in the regions, the prospects of raising the retirement age and other unpopular reforms. For Vladimir Putin, hit the “Crimean trap”, the transition to such topics means certain political death. 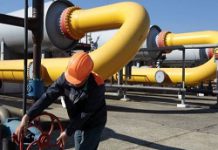 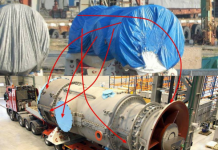 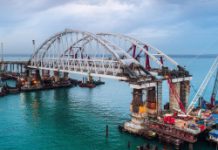 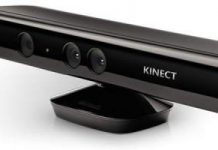 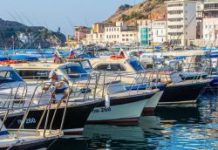