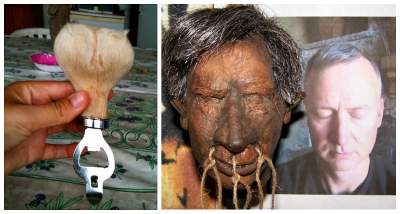 According to the survey of the company “Skyscanner!”, every year tourists around the world spend on Souvenirs almost six billion euros. The sixth part of imported purchases immediately goes in the trash. And seven percent of respondents admitted that they hate it when they bring from trips to gift fridge magnets.

But, besides the usual magnets and key rings, there are countless other memorable gifts that you can bring from the journey. Beer made from elephant dung, a keychain made of kangaroo scrotum and other strange Souvenirs, which are sold in different countries of the world. 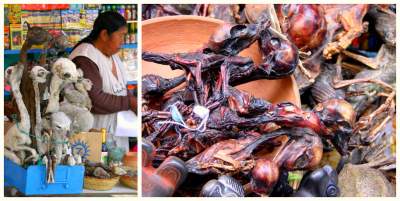 1. Bolivia: llamas, embryos and other animals

Lama fetus is very popular with local residents. They are sold at the famous Bolivian Witches market (and not only) among other strange objects of the sacral wing. During the construction of a new home in the basement in one corner of the buried foetus of llama or Alpaca. It is believed that the house built on the embryo Lama, will last long and will attract prosperity and wealth. But the embryos of pigs are used as talisman on a long journey. 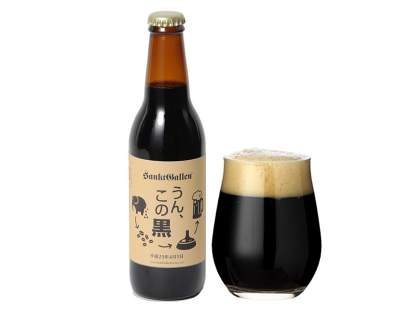 2. Japan: beer made from elephant feces

Inventive Japanese have created an unusual dark beer, raw materials for which steel coffee cherry, who was in the gastrointestinal tract of an elephant. This variety is called Un, Kono Kuro, the Japanese word IPKO, which actually means “shit”. Dark liquid with a specific fragrance is not just an exotic souvenir, but also a precious gift: one bottle costs about five thousand roubles. 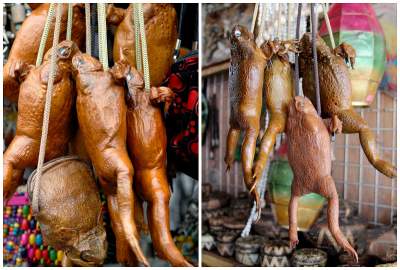 From a trip to Southeast Asia you can bring an original and practical present for your beloved mother-in-law or boss. Made from whole frogs, the souvenir, many may feel that twinge of disgust. There is clearly triggered a double standard: for some reason the wallet is made of crocodile or Python skin, the majority of the rejection is not… 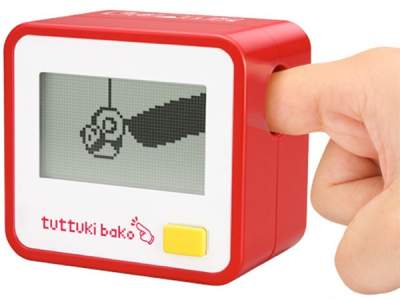 This weird gadget is a small box with a built-in display recess for insertion of a finger. The device is intended for digitization of the user’s finger and pointing them to the characters on the display. Brilliant, isn’t it? Starring: Panda cub, the amoeba, the girl’s face, the man and the seabed is one this collection, honestly, tickles the brain. There is information that the device can reflash and add more spicy scenes. 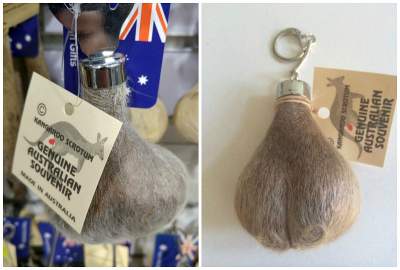 5. Australia: key rings and bottle openers from the scrotum of a kangaroo

Say “Australia” — mean kangaroo. This marsupial has long been a symbol of Green continent. It is therefore not surprising that one of the most popular Souvenirs is the scrotum poor animal, made in the form of a keychain or bottle opener. Petted a kangaroo in that light nice! 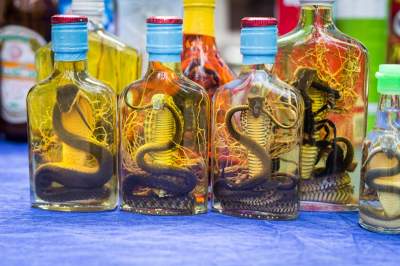 As raw material for the manufacture of this unusual drink using poisonous snakes. It is prepared by steeping creeping in such solvents as alcohol or rice wine. Ethanol denatures proteins snake venom so that it becomes harmless. Wine producers claim that it cures many ailments, however, experts believe that its curative properties are greatly exaggerated to attract potential buyers. 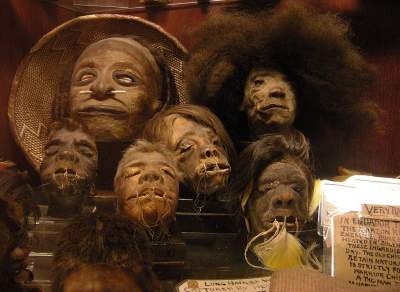 What about the idea to bring as a gift of dried human head? Once the hivaro Indians, known bounty hunters, not just killed their enemies, and making amulets out of their heads, removing the skull. This mascot could fit in the palm of his hand, and it can be worn around the neck.

Terrible tradition hivaro attracted the attention of Europeans, generously paid a terrible and rare Souvenirs. First, the demand for head gave rise to mass killings, but soon the problem was solved fake from goat and monkey skin. Now, in the Internet you can find artists who will do personal head photo — a great gift to the enemy. 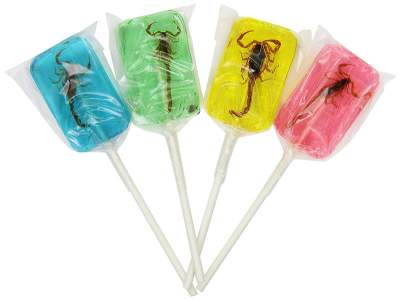 Since 1982, the California candy company HOTLIX produces unusual sweetness filled with insects. Their biggest seller — the lollipops with Scorpions, which go like hot cakes at $ 5 apiece. With the Scorpions there is not a toy, but very real, edible. They are heat-treated and pickled, and therefore completely safe to use. According to the description of those who tried these boxed sweets, the taste of the frightening toppings candy flavor reminiscent of walnuts. 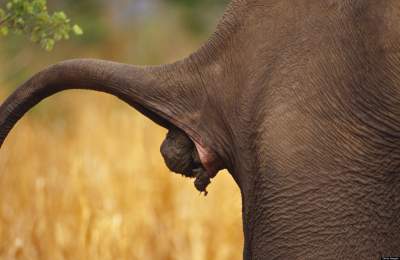 If you don’t like beer (see point 1), you can simply buy elephant dung, Packed in a beautiful box or in bulk. Trade the feces of elephants have started different zoos in the world, the benefit of the production goes smoothly and the day one animal produces up to 50 kg of product. Zoos of Vienna, Kharkiv and Prague started to sell the manure of elephants, and in the Russian Kaliningrad his hand out in vain.

The vast European Internet site appeared Schenkscheisse.eu, with which you can anonymously send the offender elephant dung in a gift box. Box with the contents of the stinking mass of 200 grams worth of 17, 77 euros. That’s really true what they say: with good advertising and beautiful wrapping you could even shit to sell.