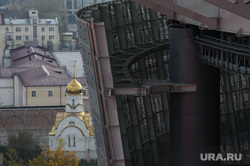 Cherkalin contains the newly renovated with all amenities. While on the walls the prisoners have placed several icons. The images of the saints were even on the headboard. According to “Kommersant”, the camera, according to human rights activists, began to resemble a prayer room or cell. The Cherkalin in jail released beard. The former security officer does not forget to exercise — squats and press in the camera and while walking.

The Cherkalin in prison are satisfied. He said that prison employees to treat him well, he also praised the prison food, noting that a particularly good soup with buckwheat, potatoes and chicken.

The FSB officer during a search of the seized money and valuables totaling 12 billion rubles. The investigation accuses him under part 6 St. 290 criminal code (bribery in especially large size), the punishment under this article provides till 15 years of imprisonment.