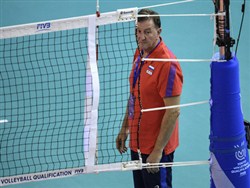 The senior trainer of female Russian national team on volleyball Sergio Busato stretched index fingers forever after defeating the South Korean team in the Olympic qualifying tournament, which caused the dissatisfaction of the volleyball Federation of the country of the opponent. This was reported by Yonhap.

The South Korean Federation called a racist gesture and wrote a complaint to the International volleyball Federation (FIVB). In the organization want to achieve punishment for the coach, to prevent similar incidents in the future.

He Busato in an interview with Sport24 said that he did not want to insult the opposing team. “I would like to apologize to all the fans of the Korean national team and the Federation. I respect team Korea and just celebrated the fact that we’re going to the Olympic Games to Japan,” he said.