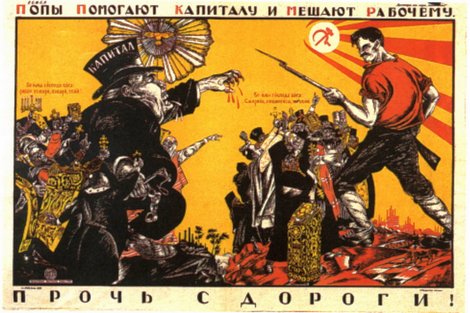 One of the main criticisms of liberals and the right wing to the Communists, connected with the history of the October Revolution, is charged with the persecution of the Orthodox Church. The most odious public figures urge followers of the Bolsheviks to “repent” of their deeds, otherwise all of them will inevitably face God’s punishment and eternal damnation.

However, the anti-Communists are silent on how behaved the reactionary part of the clergy during the Civil war. Here are some examples, which show that the Communists, if there is nothing to repent, only the fact that the Bolsheviks at that time had a soft spot for reactionaries in robes.

Zabaykalsky Bishop Yefim, who was arrested in Zabaykalsky Council for anti-Soviet activities and deported to Petrograd, were there security officers released on parole on termination of anti-Soviet activities, which he without hesitation immediately broke. Moscow Bishop Nikandr and a number of other priests in Moscow were arrested for counter-revolutionary activities, in the spring of 1918 he was released from prison. Was short-term arrest of the Patriarch Tikhon, calling openly in their sermons all parishioners, all Orthodox Russian people to fight against the Soviets. And such examples of thousand.

Feeling the “softness” of the new government, some of the “fathers of the Church” moved on to more decisive action. The result of the organized clergy of massacres in the winter of 1918-1919 killed about 200 of the Communists. In fact, the Church declared war on the Soviet power. The Soviet government was forced to take in relation to priests most stringent anti-Soviet, and sometimes even brutal measures. The Soviet government as a more organized force that won the war is not without casualties. But the blame for these sacrifices lies with the Church hierarchy, to provoke a massacre.

During the fighting in Moscow “Holy fathers” gave cadets their temples as the firing points are located in the tower guns. After the defeat of the cadets they continued their “sacred” thing. There was not a single white guard conspiracy, no revolt, which would have involved the clergy.

“The fathers of the Church” happily met Czechs speech, which marked the beginning of the Civil war. Bishop of Ekaterinburg, welcoming organized by the Entente Czechoslovak corps, committed in the Cathedral of Yekaterinburg, a solemn Liturgy. In his sermon he told the congregation that the Czechs make “the great cause of revival of Russia.”

As enthusiastic “Church fathers” met Entente interventionists. They welcomed their thanksgiving. “The joy turned into delight when the land of our city descended from the ships coming to our noble allies,” admired Archpriest Lelyukhin. Even the ataman Semenov, who himself considered a bandit Kolchak was awarded the Orthodox Church the title “Knight of the Holy sepulchre.”

The Orthodox clergy in their sermons glorified the whites, urging all Christians to the struggle against the Soviet power. The priests in mass quantity produced posters and leaflets against the Bolsheviks, in which he called: “Throw the Soviet regime!” Helped Kolchak and Denikin to drive the peasants into the white army. About all opposing mobilization, the clergy reported to the counterintelligence. The white army was created as a propaganda station wagons churches. Organized even a special Church preachers.

But the clergy did not stop. It began to take an active part in the preparation of anti-Soviet riots. Colonel Sakharov, head of the white guard uprising in Murom, took refuge in the Spassky monastery. Murom Mitrofan Bishop blessed him in the rebellion with the words: “the Bolsheviks must be destroyed, and their spirit was not.”

Priests and monks took an active part in the preparation of the white guard coup in Yaroslavl. Bishop Agafangel provided comprehensive support to the rebels. The stronghold of the coup began Yaroslavl monasteries, bell towers which, as in Moscow, was rebel gun emplacements. The clergy then took part in many counter-revolutionary organizations.

Monasteries and churches then supported by any anti-Soviet formation, up to the bandit. The Solovetsky monastery was discovered 8 three-inch guns, 2 machine guns, more than 600 rifles and Berdan rifle and a large quantity of ammunition. In the Kiev Mikhailovsky monastery was hidden 4 pounds of dynamite, rifles and 900 rounds. Weapons, including machine guns, were buried in the convent matreninskom Ukraine. There found a shelter the leaders of numerous gangs. A counter-revolutionary organization was revealed in Orange, Yakovlevsky, Nikolo-Ugreshsky and many other monasteries.

Many priests voluntarily, without any coercion performed the role of ordinary spies and informants the white armies of the South, East and North. Often to identify sympathizers of the Bolsheviks, they violated the secrecy of confession. In many dioceses, located in the occupied territories by the whites, the priests closely cooperated with the counter-intelligence. Thus, in the Baikal region there was publicity departments to deaneries, groups and groups according to the entity that are subordinate to the headquarters of the white guard of the Chita military district. In Barnaul in January, 1919 garrison, the priest said in counterintelligence that when he talked with two companies of soldiers “about the fight against the Bolsheviks”, 21 soldiers and 2 officers “reacted with disbelief to the suggestion and even mind”. They were immediately arrested and then shot.

But that’s not all. Cases are known, when the priests, ignoring their commandments, directly took up arms in the struggle against Soviet power. For this purpose, the “Holy fathers” formed a special religious groups. So, Siberia was established militia of the Holy cross, commanded the priests. There, in Siberia, on the initiative of Bishop Silvester was formed and such white religious part, as “the Regiment of Jesus,” “the Regiment of the virgin”, “the Regiment of Elijah the Prophet,” etc. Under the Stavropol priests created a detachment of 700 clergy. Under the Tsaritsyn fighting “Regiment of Christ the Savior,” composed solely of the clergy. Archpriest Vostokov has created the “Crusader” part of the South of Russia. Did not disdain the priests and participation in the kulak gang. The rector of the Rostov Cathedral Verkhovsky, the priest Kuznetsov from Ust-Pier and many other stood at the head of these gangs. In Yekaterinburg was uncovered anti-Soviet conspiracy, led by deacon Vladimir Khvostov. Every member of this organization was to conduct anti-Soviet propaganda at any cost to obtain weapons, not stopping even before the murder.

From all this it follows that today’s Communists have nothing to ask forgiveness from the Church. The Church itself did everything to make her head the wrath of heaven in the form of the Bolshevik “persecution”. The Bolsheviks at that time had no choice. Humane methods for the “Church fathers”, which originally was used by the Bolsheviks, was not justified, and they had to resort to more stringent repressive measures. Where words do not help, use force. This is a fact of life.