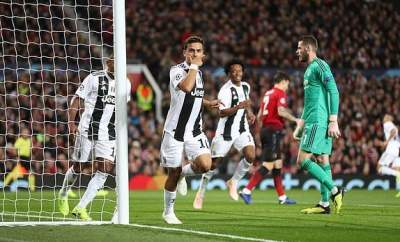 Juventus first round of the group stage of the Champions League passed with three wins and no goals conceded.

The former leader of the “Manchester United” Cristiano Ronaldo for the first time failing to score against a former club that did not prevent Juventus to take away from old Trafford three points. Juventus have not won in the lair of Manchester United since 1996.

The key moment of the match came on 17 minutes, Ronaldo was unable to close a cross from the flank, but came to the rescue Paulo Dibala in touch has opened the scoring with “man UTD”.

The efforts of David De GEA at Manchester United until the final whistle claimed the rescue. The most real chance to escape from defeat, the team Jose Mourinho was in the 75th minute when Paul Pogba’s strike from the corner of the penalty area hit the post.

“Young boys” on the third attempt opened the scoring account in the Champions League. The champion of Switzerland in the home match against Valencia played at the three points, but the problems with finishing prevented the hosts threaten for the first victory.

The climax of the match came in the 89th minute when Ivorian footballer “young Boys” Sekou Sanogo head of the goalie hit the post.