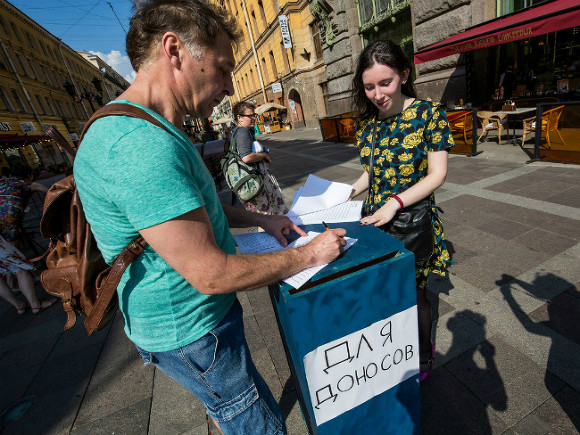 Informers still hold people in fear. But the prestige of their work is not as high as before.

Taken in the spring of 2019, the acts informally known laws about Internet insults of the authorities, caused, of course, a stream of denunciations. Or, to put it delicately, “statements”.

And was, apparently, a lot, since the fall in the regional Department of the Ministry of internal Affairs received a training manual, a noble whose purpose was to introduce doneitalls element within the coast. The police recommended to do this only when the undeniable presence of “foul language,” “images of a lewd nature” and demonstrations of “arrogance and cynicism”. But in doubtful cases, to consult with experts and prosecutors. They are not bad advice.

It’s clearly not about the weakening of the nuts. But to properly intimidate people network, do not arbitrarily give the drafters of the “claims” imagined themselves masters of the situation.

It has always been. Even in the darkest years, with their millions of denunciations, the protective car is quite reserved attitude to the “applications” received the order from the concerned people from the outside.

An example of contemporary attitudes to unsolicited denunciations of the massacre of Osip Mandelstam. In the spring of 1938 the chief of the Treasury of writers ‘ Union Vladimir stawski on its own initiative asked the people’s Commissar of internal Affairs Nikolai Yezhov “to help solve the issue of O. Mandelshtam”, complaining that his friends “make him a Martyr — genius of the poet, recognized by no one”. Five years in the camps, obtained by Mandelstam meant for him certain death. But Yezhov, under whose leadership in the months shot a thousand people a day, considered, probably, a five-year hard life something of a moderate recovery. To impose a death sentence arbitrarily, “the statement,” the head of the Soviet writers was not enough even then.

Now absolutely other times. Humanization of all aspects of life has made giant strides. But some basic principles of the system observes. To repressive the wheels spun, it is desirable or even necessary to someone’s “statement”. As well as closely related to him “witness statement”, “expert opinions”, etc., derived not primarily from “fans”, and from the narrow circle of specially trained people.

The past year has shown that this approach does not work as good as before.

For example, the case of the subversive “New greatness” designed and created embedded provocateurs, with the current level of publicity repressive machine brings a lot of inconvenience. She tries not to pay attention to them, but the same enjoyment out of not.

Police and national guardsmen, brought as witnesses of the atrocities of the Moscow demonstrators, through one ashamed to complain about getting cups and touching the armor. You have to Supplement and even replace them with specially trained witness-pros.

Through all the state filters case of illiterate experts-conspiracy exposes their employers to laugh. “Three specialist accredited by Roskomnadzor” exposed the most innocent pop singer Yegor creed as “representative of the aggressive anti-Russian subculture of rappers, the carrying-values of Satanism”. The text, which could be a favorite website of readers of the site checklist, was removed.

And publication in specialized periodicals crudely made dirt, like the complaint of a non-existent girl’s bad behavior by famous St. Petersburg systemic opposition, brings no effect, since the public believes that hi. – Jim always lie.

However, there are still areas in which progress remained good.

Take, for example, children’s Ombudsman under the President of Anna Kuznetsova. Type in “Yandex”: “Anna Kuznetsova asked the Prosecutor” and “Anna Kuznetsova appealed to the Investigative Committee.” And immediately see what is in the public part of the work of this influential official. Defender of the rights of children everything reacts uniformly, — “statements” to the court. Innovator, perhaps, will say that the state detsadika service has matured to become one of the divisions of the Prosecutor’s office. And I do not agree. Separate their existence helps the smooth delivery of information for propaganda reasons.

And the reason this dismal year was the road. In some areas it even encouraged the applicants are volunteers.

The two enthusiasti-prirodoslovni whose activities are powerfully advertised in the media, put the Minister of the Irkutsk forest complex implicated them in illegal deforestation. And not him alone. “At the moment, thanks to the work of activists filed three criminal cases…” Putin is personally concerned about their security: “the President then said, “We will think about how to protect you””. Under such protection work in full swing. “After his raids, women have written appeals to all the Supervisory authorities — prosecutors, police, Investigative Committee, Rosprirodnadzor, the Ministry of forest complex, natural resources Ministry, the Federal service…” And all immediately take the case. Some will agree, the contrast with what happens in Cheese. Only person who knows, as we all work, will not marvel at a giant difference.

See, however, in the high spheres. Here because living and working are the same people as our other floors, too, and always had “claims” and “claimants”.

To make a long story, I recall only two major disputes of economic entities of 2019. One familiar story in an unusual.

The case of the investment Fund Baring Vostok, it is “business Calvey”, like all the previous ones. Representatives of one entity are sitting in detention facilities or under house arrest, and “saying” on them representatives of the subject of opposing, as many as embarrassing, reap the fruits of the forthcoming victory. One of them holds a high administrative position each of the presidential assistant for Economics Andrei Belousov, Artem Avetisyan — still finds time to help Russian businessmen right to complain to the guardians, creating a platform “For business”, through which they, without fear of consequences, can cry law enforcement authorities. “There are no reputational risks for the platform [in connection with my participation in it] I don’t see — candidly explains Avetisyan. On the contrary, I received a flurry of calls and messages from businesses with questions about how to apply for help through the platform.”

The story, as you can see, standard. But it is much less than the standard was very much recent case of “Rambler vs Nginx”. It started normally, with “statements” authorized “the Rambler” structure and searches in the office and in the apartments of employees Nginx “thing” suddenly stalled, and the Board of Directors of Rambler Group told his management to contact the authorities with a request to close it. The reason, of course, not in the surging suddenly the nobility. Just coalition for the protection of victims was stronger and more active coalition “applicants”.

And that’s the key. The system will always rely on a cadre of informers and kindly refer to the informants-volunteers. “Applicants” can slow down only if you will catch what is around them, the emptiness and all or almost all of them reject it. Far from it. But weak signs of recovery in 2019 can be seen.

As Communist agitprop hang noodles on the ears of the younger...