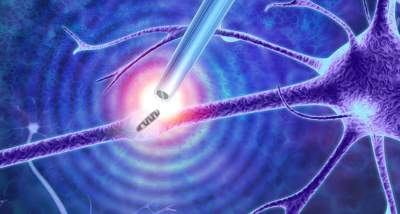 Using electric pulses, “tweezers” can extract individual DNA, proteins and organelles of living cells without destroying them. On the development of worked scientists from Imperial College London. Their study, published in the journal Nature Nanotechnology, could help scientists in the creation of the “Atlas of human cells” and to give a new idea of how healthy cells operate and what is happening in the affected cells.

Scientists are constantly expanding their knowledge on how cells function, but still questions remain. This is especially true for individual cells of the same type, such as brain cells, muscle or fat cells which are still very different from each other in composition at the molecular level. Compilation of “Atlas” or “catalog” diversity of cells that seem identical may help researchers better understand fundamental cellular processes and develop improved models of disease and new therapeutic methods for patients.

However, traditional methods of studying these differences, the cell is usually destroyed – and as a result all content is mixed. This leads to loss of information not only about how the cell organelles were located relative to each other, but also about the molecular changes in the cell over time.

“Nanopencil”, developed by scientists from Imperial College London, allows you to save this information. Project leader, Professor Joshua Edel (Edel Joshua), said: “With tweezers, we can extract from the cell the minimum number of molecules that we need, in real time, without damaging the cell itself. We have demonstrated that we can manipulate and extract several different parts from different areas of the cell, including the mitochondria of the cell, RNA from the cytoplasm and even the DNA nucleus.”

Tweezers made of sharp glass rod with a pair of electrodes on the end, made of a material based on carbon – such as graphite. The tip is less than 50 nanometers (a nanometer is one – millionth of a millimeter) in diameter and is divided into two electrodes with a gap of 10-20 nanometers between them.

The method is based on the phenomenon called dielectrophoresis. Tweezers generates a sufficiently high electric field, which allows you to capture and extract a small number of cells, such as DNA or transcription factors – molecules that can modify the activity of genes.

In the future a new tool can be used in experiments with nerve cells, which is currently impossible. Adding or removing mitochondria from single cells using “nanopencil”, researchers can better understand the role of these organelles, especially in neurodegenerative diseases.