Russian brand of smartphones BQ has released a new model of Aurora SE (index 5732L) – tidy compact phone of initial level. Pleasant price (7500 rubles at the time of writing), it also got very expensive from the design we can say that it is worth at least half or even twice the price.

The smartphone is available in the Russian retail in three body colors – black-purple, blue-black and totally black. We went for a test instance, painted black.

From SE Aurora is a very important difference from 90% of smartphones in the price range up to 8000 rubles – a modern charging interface. While the vast majority of available mobile phones cost uncomfortable microUSB 2.0, SE Aurora offers modern symmetrical USB-C. let’s Go testing. 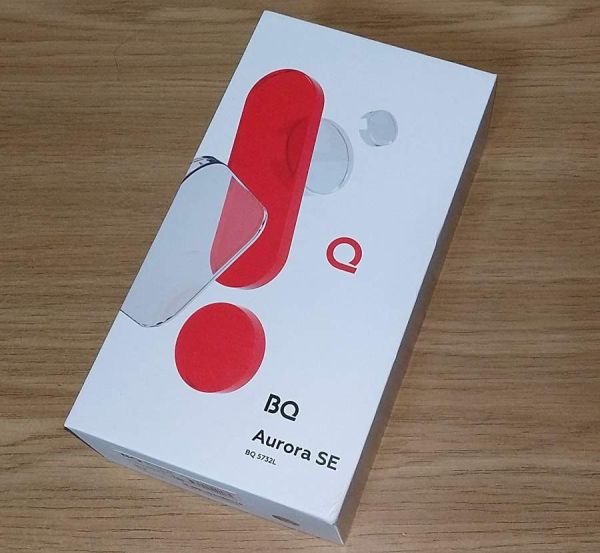 In any case, the Aurora SE, performed in the style BQ – if you had it opened like a book, it is now all done the same way as Samsung, Apple and other brands. 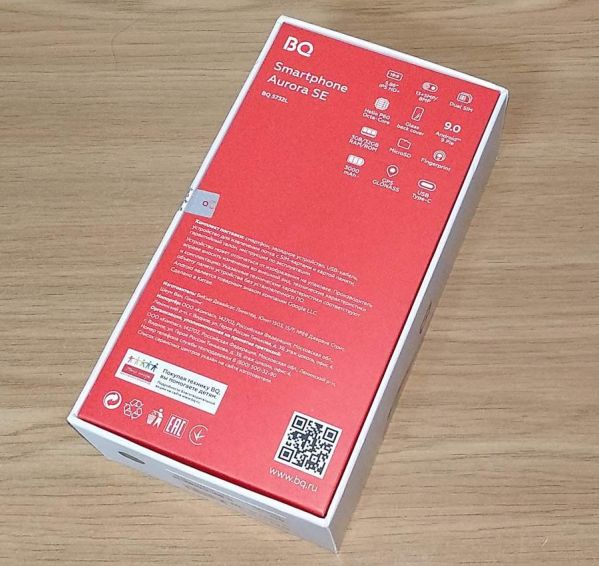 The quality of materials and printing at the height of the drawing is good, but on the box there are no renders of the smartphone, therefore, evaluate its appearance will be either on the Internet or in a shop window. The top of the box is decorated with three-dimensional images and useful information can not be held, whereas the bottom-the manufacturer has placed a list of characteristics of the smartphone, though rather detailed. It also lists the accessories supplied. 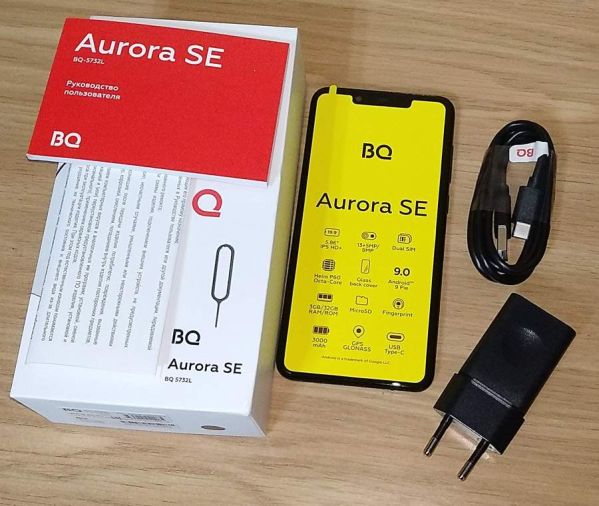 In a box with Aurora SE, in addition to himself, are 2-ampere charger, USB cable, a-C, instruction manual and warranty card. To eject SIM cards have a paper clip of high quality metal, plus the display has protective film in addition to shipping. For a smartphone under 10 000 kitting very good. 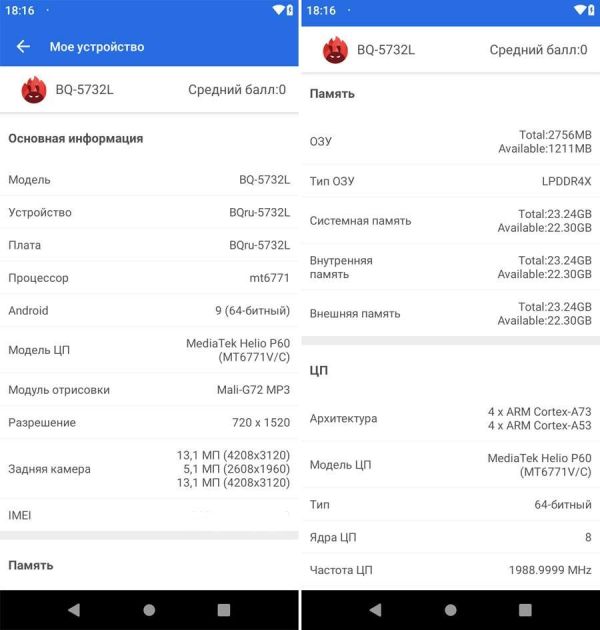 BQ revealed detailed specifications on the box Aurora SE and also on its official website and in the complete instruction manual. The information in these sources are identical. The following options are supplemented by information from the benchmark AnTuTu. 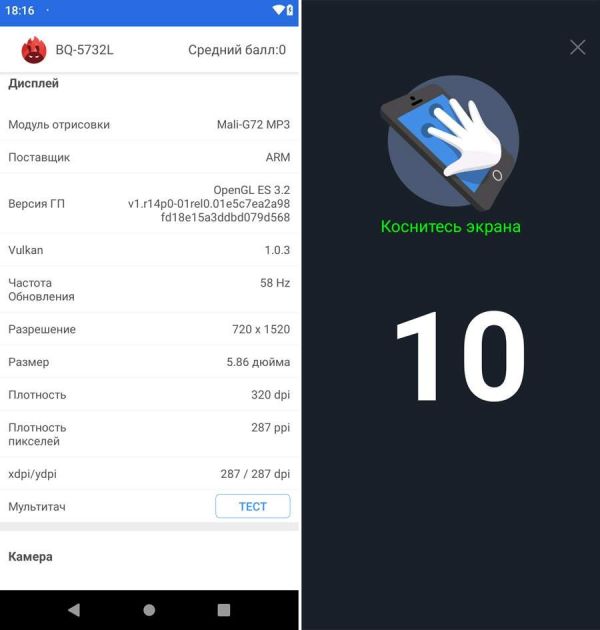 From the above, in addition to the mentioned USB-C port, it is necessary to highlight the presence of fairly powerful processor Helio P60. It demonstrates good performance in many mobile games that we later confirmed, when will test it. You can also pay attention to the separate entry under headphones, in 2017, Apple got rid of it, and everyone started to imitate her, though many do not like to use adapters for USB-C. Here with the full order. 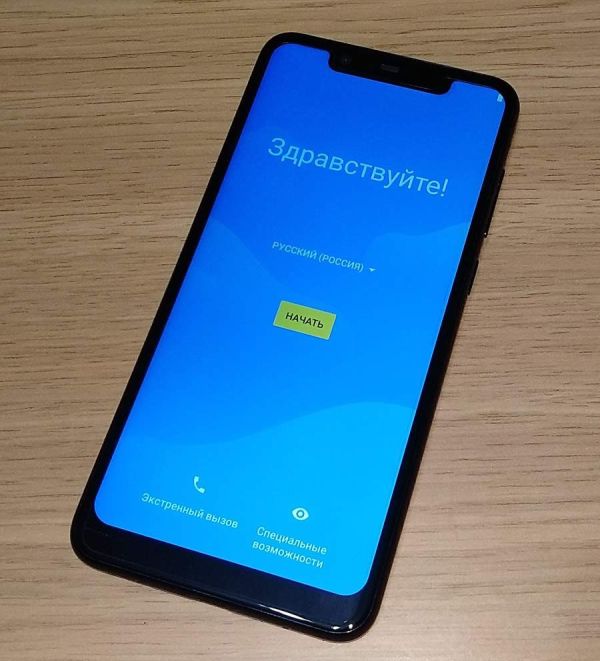 SE Aurora is made in a classic enclosure without any unnecessary design elements. The appearance of the smartphone was strict and at the same time beautiful – a pleasant impression is reinforced by the covering rear panel back glass. In our case, the smartphone is fully glossy and fully black in the same color and painted the ends of the shell, and the frame around the display.

Speaking of the frame – sides and top it has a minimum thickness, but the bottom-BQ for some reason left a disproportionately large “chin”. It could easily fit into the buttons, but they are not. On top there is a large cutout in the display – its form can be considered a classic. 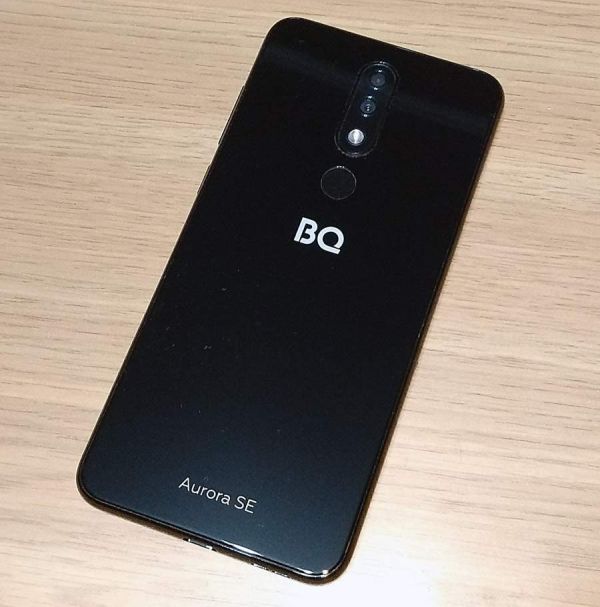 The body of the smartphone has rounded corners and slightly rounded edges, its rear glass panel almost perfectly flat – there is only the protruding camera module and a hole for the fingerprint scanner.

For location of elements in SE Aurora all the classics: the volume buttons and the inclusion on the right side, the tray under the SIM card on the left and at the bottom is the main speaker, microphone and charging port. At the upper end of the manufacturer suffered a connector for earphones and additional microphone noise reduction. 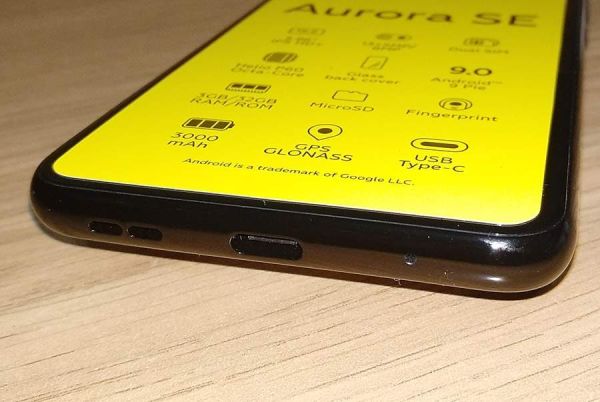 Due to the elongated display, the smartphone seems more compact than it really is. In his hand is quite useful as male and female, but due to the glossy ends tends to slip out periodically. Or stronger then you need to hold the device, or buy him a case, the benefit BQ offers a wide range of accessories for their gadgets. 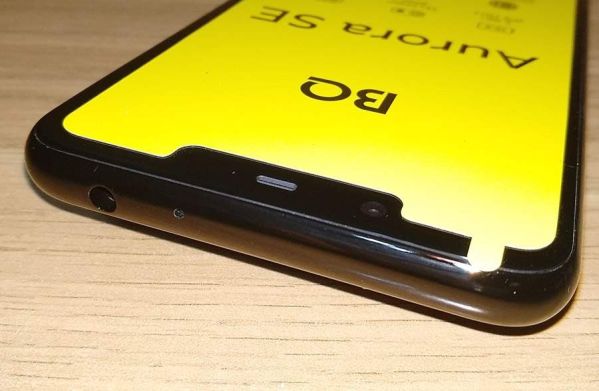 The location of the most frequently used elements of the case competent, especially the headphone connector and dactyloscopy – it is easy to find by touch, and the hole under it big enough for quick recognition mark. The main speaker is not closed by hand or top, the side buttons are pressed moderately tight and have a good tangible benefits. 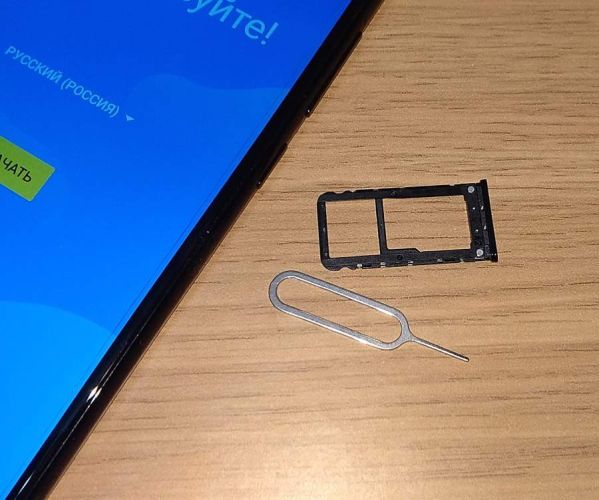 Some question was raised as the tray for SIM-cards: first, he’s here hybrid, that is, will establish either dual SIM or a single SIM plus microSD card, although the internal memory of the smartphone is not very high. Secondly, on the tray there are no notes on how to insert it, which increases the risk of failure of internal contacts on the device. 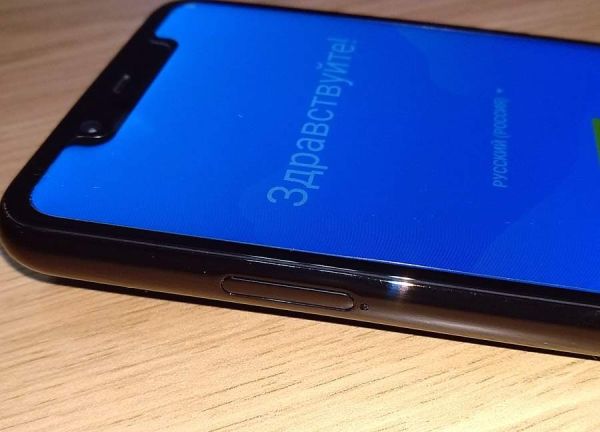 Also note that the glossy casing is quickly covered with fingerprints, though at the back or on the ends. He also collects small dust particles, so that the cover obligatory for him. 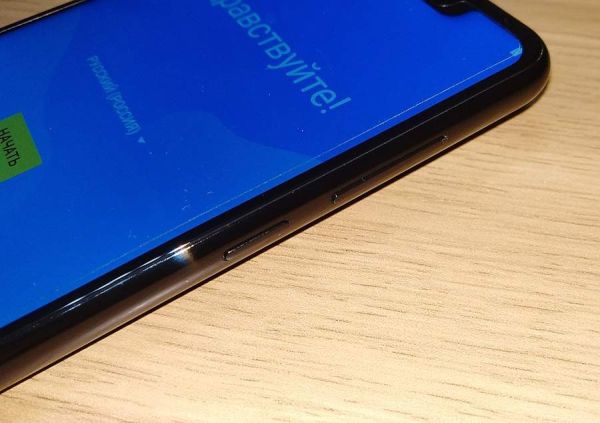 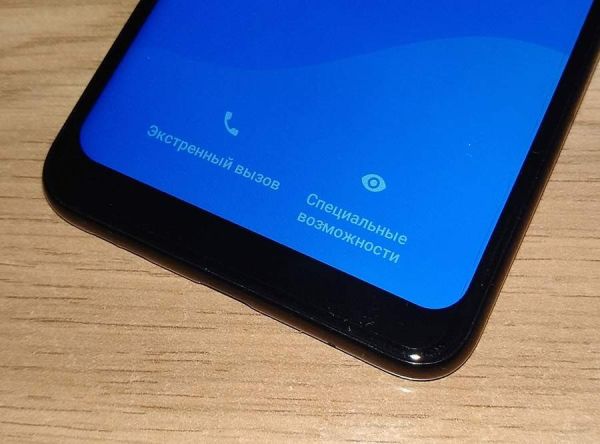 Screen Aurora SE frankly pleased – in smartphones for the money, used very seldom such a high quality panel. Applied here, the matrix really has a very wide viewing angles, and color reproduction, she is in complete order. The inversion of colors when changing the viewing angle visible to the camera but completely invisible to the eye. 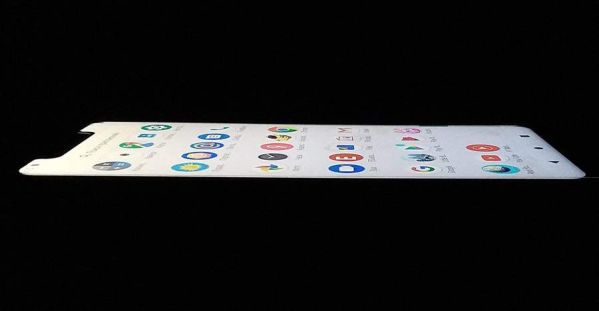 The display brightness is very high: in the room it is possible to reduce practically to a minimum, and will be quite comfortable and on the street on a nice day at the maximum brightness the screen remains quite readable. 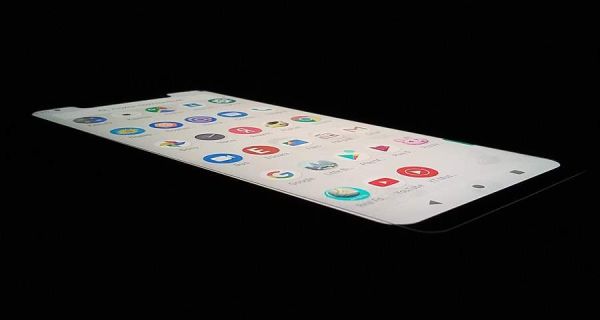 As for the touch layer, the first and foremost it is worth noting that it handles up to 10 simultaneous touches. This is the maximum display in modern smartphones, which also was a pleasant surprise. 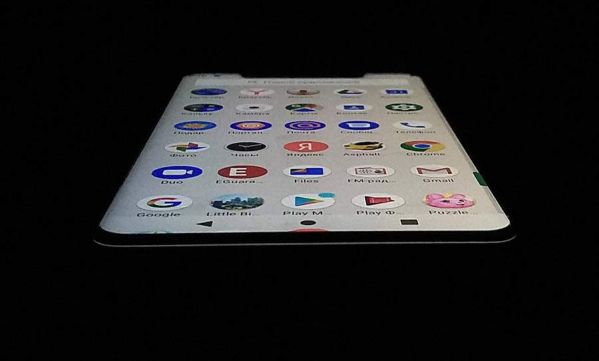 Aurora SE sounds very loud and even lush sound does not seem flat, well visible as a high frequency, and the average low. Of course, serious bass from it is not worth waiting, like any other smartphone, but a pleasant experience from the richness of sound is a new creation BQ still leaves.

The smartphone is quite comfortable to listen to music and watch videos, the volume enough to hear incoming call and message even in a noisy place or waking up from the alarm clock. At the same time a particularly loud speaker can not be called in noisy environments it is sometimes not enough. In the premises the interlocutor can hear very well even at half volume.

To the microphone, there are no complaints – it is very well cope with their responsibilities at virtually any level of external noise. Extreme conditions, for example, a very noisy manufacturing or heavy wind, do not take into account, because this is extreme.

To protect Aurora BQ SE from unauthorized access, in addition to the standard Android tools (pin, password, pattern), can be a fingerprint or Face ID. For face unlock uses the front camera, the face is well-recognized even in a dim ambient light. Recognition quality high – out of 10 times once the system malfunctioned.

Dactyloscopy in the smartphone is very bad – 10 out of 10 positives if there is only one copy of the print. Unlocking is triggered almost instantly, the screen turns on without delay, and after reading the imprint the smartphone immediately opens the Desk, bypassing the lock screen. It is very convenient.

Of course, the sensor doesn’t recognize touch in the usual gloves. 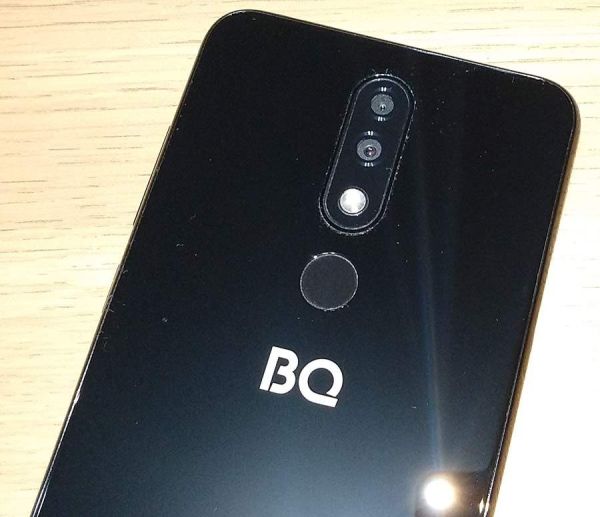 Set of chambers SE Aurora consists of three sensors 8 MP for selfies, 13 MP (main module) and 5 MP (portreti). Best of all in this list have shown themselves front camera – it’s great (considering the cost of the smartphone, of course) takes both day and in very low ambient light. In a good light artifacts is not quite in the twilight of their number is minimal. 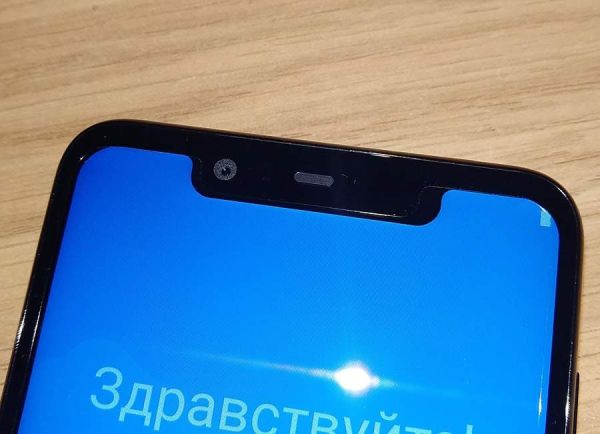 The primary sensor takes good but rather ordinary. There should be clarified that the BQ is not positioning Aurora as a SE camera phone, so the emphasis on the cameras in this model is not done. As for portretiki, it is very good to blur the background in bright street lighting. Indoor blur is already on “four” on a five point scale – sometimes the subject may not be in focus.

If you evaluate the operation of the camera in the smartphone in General, then, in our opinion, this is 4 of 5.

Capacity built-in battery smartphone 3000 mAh battery, and we managed to stretch it charge almost four days, but the maximum savings. He included no more than 30 minutes of calls, no more than two hours on the Internet and plus or minus a half-hour on YouTube daily. The result is more than decent.

On average, a single charge smartphone is enough for half a day or two depending on intensity of use and number of installed applications – many of them are constantly connected to the Internet that has a negative impact on the autonomy of the gadget.

Charges the battery very quickly – a full charge from the regular memory can reach a maximum of two hours, so the night to put do not have, as well as to carry the charge. Heating the battery is not observed, but fast charging it too does not support – when connected to a 20-watt memory he was still contracted for a couple of hours. 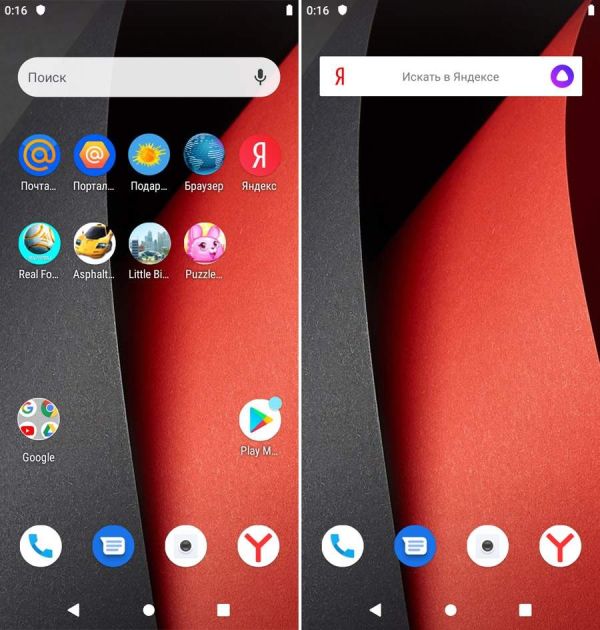 Firmware Aurora SE gives the impression of a very well optimized – immediately after the first start all works very quickly, directly at the level several times more expensive smartphones. However, we have something to pay: the smartphone is almost no additional settings and options, only the standard features of Android, dilute a small amount of gestures to control. It is not excluded that with the updates that will arrive over the air, BQ add to this smartphone with new features. 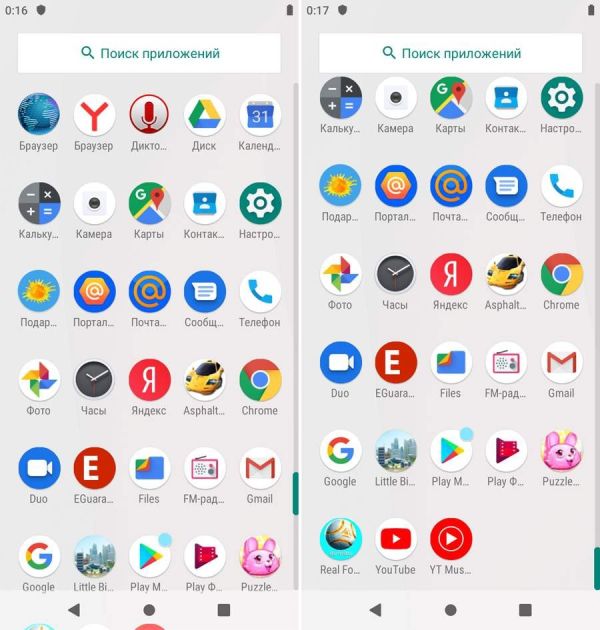 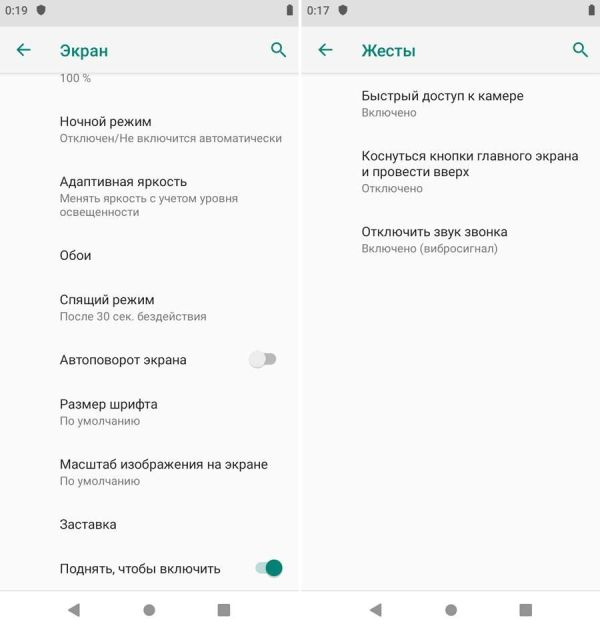 After the first run in the system there are a number of third-party apps – there are nine of them, seven of them are removed in the two accounts, and two (both from “Yandex”) can be disabled, as well as a number of unnecessary services Google. This stronger performance will improve in mobile – we checked it out. 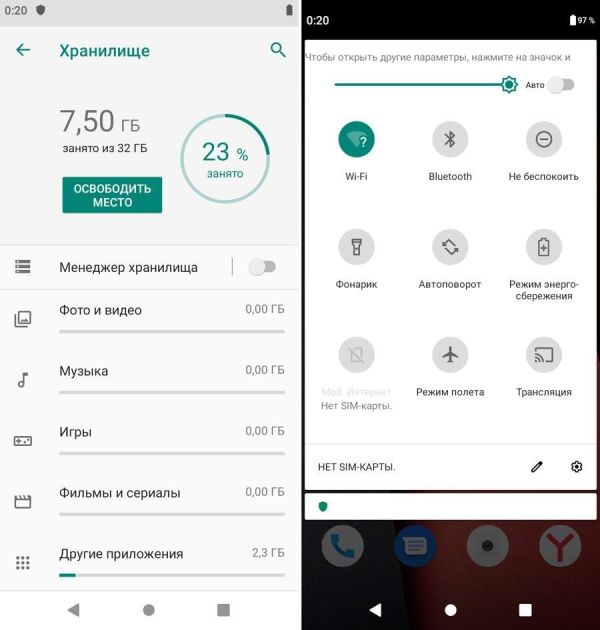 The default 32 GB of memory employing a 7.5 GB, including the space allocated for firmware. Uninstalling third-party software will release at least another 500 MB of disk space. 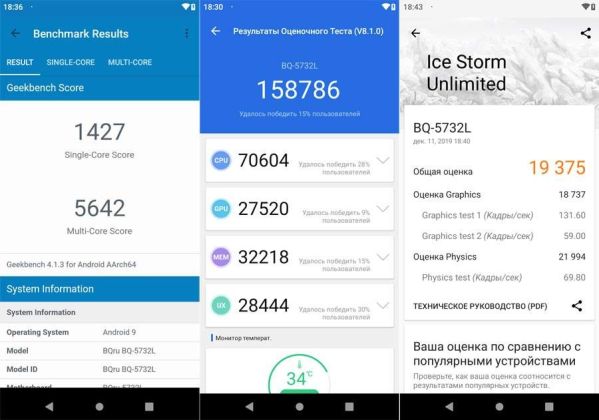 Despite its low price, Aurora SE shows excellent results in popular benchmarks. We have tested it in current versions of AnTuTu, 3DMark pack Ice Storm and Geekbench.

As you can see in the screenshots, AnTuTu smartphone 158 earned almost 800 points in 3DMark almost 19 300, and Geekbench gave him a 1427 and 5642 points in single-core and multi-core modes respectively. All this means that the capabilities of the hardware Aurora SE is more than enough the vast majority of modern games, except in the most demanding toys will have to put medium or minimum graphics settings – during testing the processor noticeable (but not critical) is heated.