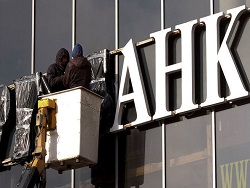 In three to five years, the banking sector will be the state at 85%, experts predict. Competition among credit institutions dramatically declined, the toxic assets are growing, and after a year or two, the crisis could erupt bad debt. And new technology can finish the sector. Small and even medium-sized banks no funds to complete digitization of its services.

The private banking sector disappears, said Vasily Solodkov, Director of the Banking Institute of HSE in the course of the round table in Higher school of Economics. He was supported by the Chairman of the Board “UniCredit Bank” Mikhail Alekseev.

According to him, the state’s share in the sector in recent years has increased from 62% to 70%. While in the remaining 30% about 8% are private foreign banks. “But after three to five years the state share in the banking sector may exceed 85%,” — said the banker.

One of the panelists made a joke on this subject: “In Russia the public sector is 70%, the rest is grey”.

Nationalization exacerbated one of the key problems of the banking sector — the lack of equal competition, drew the attention of Mikhail Alekseev. For example, the cost of funding for private banks and state-owned banks is significantly different in favor of the latter, he said. This has a negative impact on corporate lending, and on lending to individuals.

Another issue that is closely connected with the growth of the share of state banks, a decline in confidence in private banks from the population.

In turn, the banks themselves do not trust the authorities and the regulator. There is uncertainty regarding the application of the regulation, says Olga Belenkaya, head of Department of financial analysis and economic studies of Bank “Alba the Alliance”.

Need higher information transparency and consistency of actions of the regulator in reforming the sector, she said.

A similar assessment was previously made by the Institute “development Center” HSE. The owners of the credit organizations prefer in droves to withdraw funds from their banks and put the license on the table, the regulator said in a March survey center.

“The reason? It is simple — lack of faith in the bright future at the end of the tunnel. And if anyone saw light, most took him for the spotlight inexorably approaching locomotive”, — experts say.

The growth of the toxic assets is another issue pointed out by experts and market participants. According to the calculations of General Director of “Biznesprom” Pavel samieva, problem loans amount to at least 15%.

It should add another 2 trillion rubles, which can be estimated-owned banks non-core assets.

“There is no evidence of a decline in the proportion of toxic assets, the situation is frozen at the level of 2011-2012”, — says Samiev.

According to the calculations of Alexeev, overdue debt increased in 2014. For retail loans, it increased from 5 to 7 enterprise from 4.5% to 6.5%.

Belenkaya believes that banks for several years how to choose the “strategy for renewal” of troubled loans accumulate, they mask them. The expert proposed to solve the problem of toxic loans on the basis of the plan recently published by the European Commission. In Europe, by the way, the volume of problem assets reached almost EUR 1 trillion.

Experts do not rule out a crisis of bad debts in the coming years. This, in particular, said the Director of the Center for structural research of the Ranepa, the ex-Deputy Minister of economic development Alexei Vedev. According to him, it can happen in the next year or two “with high probability”.

Now the banks accumulated a portfolio of loans at 11 trillion rubles, placed under the beyond 16% per annum, with 2 trillion rubles in interest payments annually, said Vedev. This is a very heavy burden on borrowers and the economy. The bulk of the debt falls on weak affluent segments of the population. “The situation is close to disastrous!”, — he considers.

He did not agree with those opponents of the banking sector and reassure ourselves that the current interest on loans is acceptable that in the old days, the mortgage “took place at 20% per annum”. But then the incomes of the population grew by 30%, and now barely 3%, said Vedev.

He believes that banks and the authorities should not hope for growth of lending to individuals and mortgage loans that the mortgage can be a driver of economic growth. This model of stimulating economic growth is the big question.

And will finish the private banking sector digitalisation, the transition of banking services online, said Nikolai Kashcheyev, head of analytical Department of Promsvyazbank.

The big banks will be able to update the software, small and medium-not enough funds for it. In the end, the big players will hold the digitalization of services will extend their services to even remote areas in which traditionally “grazed” regional banks.

Earlier, first Deputy Chairman of the Bank of Russia Olga Skorobogatova reported that the banks will lose between 20-60% of the profits by 2025 if they fail to implement new technologies.

The discussion was also attended by the representative of the Governor — Andrey Lapin, Deputy Director of monetary policy Department, Bank of Russia. He made it clear that the reasons for pessimism a bit. The Central Bank did not see big problems in the sector. Margin is not reduced, the balances are cleared. Arrears on loans of individuals and legal entities is reduced. Central Bank expects growth in profit of Russian banks in 2018.