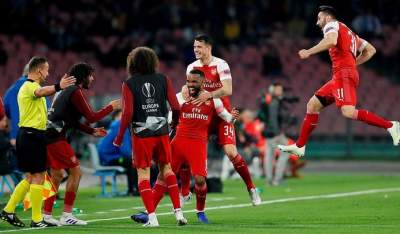 The circle of applicants for a victory in the Europa League 2018-2019 narrowed down to four clubs.

“Napoli” after the defeat 0:2 in London could not in the home match battle with Arsenal. The gunners were completely in control of the game and a goal by Alexandre Lacazette’s free-kick allowed them long before the final whistle to cover all the questions in this pair.

Sensational Slavia after the passage of the “Seville” had a decent resistance to Chelsea in the second leg of the Czechs after 17 minutes we conceded three goals, but did not give up and managed to reduce the gap to just one goal. Who knows what would have developed this confrontation, if “Slavia” with the score 3:4 in the 61st minute had not met its slaughter time.

“Eintracht” after 2:4 in Lisbon in the second leg scored by Benfica two goals and drove the Portuguese out of the Europa League on away goals. Benfica toothless had a re-match and I could never stretch the German defense. In fairness, the first goal for “Eintracht” scored from an offside position, but the lack of Europa League VAR saved owners.

The results of return matches of the 1/4 finals of the Europa League:

In the semi-finals of the Europa League, Arsenal will play with “Valencia” and “Chelsea” will meet with Eintracht from Frankfurt. The matches of this stage of the Eurocup will be held on 2 and 9 may.