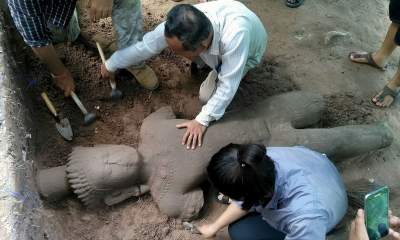 Almost two-meter statue was created in the late 12th century

Archaeologists in the temple complex of Angkor in Cambodia, unearthed a six-foot statue on the site of the ancient hospital, which performed the function of a guard.

Almost two-meter statue which, according to archaeologists, was established in the late 12th century, once stood guard over the ancient hospital in the famous temple complex of Angkor in Cambodia.

Archaeologists said that the arms and legs of the statue broke, but the threads on the body and mind “remains beautiful”, despite the fact that much time has passed since its creation.

Long Kosal, representative of the complex, said that Angkor is a world heritage site and contains remains of different capitals of the Khmer Empire, Dating from the 9-15th centuries. The complex is the most popular tourist destination in Cambodia.

In its heyday the town had more than a hundred temples, and lived in it more than a million people, making it one of the most densely populated pre-industrial centres in the world.

Huge tracts pipetted for decades, but most of the treasures still hidden underground.