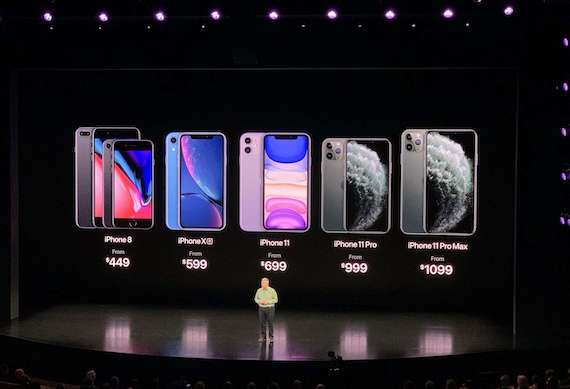 The evening of 10 September, Apple held a presentation of new devices, including the iPhone, iPad and Apple Watch, also introduced new services. And though the event was waiting for, but it’s one thing — boring.

First briefly about the end of the presentation. Was presented the updates of several devices: iPad, Apple Watch and of course the iPhone.

iPad – in fact enlarged and slightly enhanced iron iPad 2018. Good screen, support Apple “pencil”, good performance and all this at a low price from 28 000 to 35 000 rubles in Russia. Good offer for those who wanted to upgrade the tablet but doesn’t need something super-powerful types of iPad Pro.

Watch Series 5 — ‘ve updated the display to a higher quality and added option “always on screen” that will allow the clock to constantly show the time (or other data needed to the owner), at the same intensity of battery consumption as before. Added a titanium and ceramic version, and the ability to call an ambulance in 150 countries around the world directly through the watch. But before I talk about the product of course was the presentation on assistance in the control of health, who and how helped watch last year. It’s just a very cute but very marketing stream is aimed at people who are too much worried about your health or about the health of their elderly parents/grandparents.

Game Apple Arcade — in fact it is just a subscription that will give you for 199 rubles per month an opportunity for the entire family download high-quality games that will work without Internet access (after installation) and will not require in-game purchases. Sounds good, but we have to see what the result will be presented inside the service and how active there will come out new games. This only time will tell, say the next 3-4 months. The launch of the service scheduled for September 19th

Service series Apple TV+. Here is about the same as with Arcade — will the series, including a unique Apple, will be the star in these serials, the good budgets are those that have already filmed and which will be available immediately after launch. But the extent to which these operas will be good will become clear only after viewing. And so will the platform regularly to give a good series of its own production we will know only after 6 months. Well the saddest thing for Russia — the dubbing is not at all the series (at least the first time). In General, another announcement. Especially when you consider that the launch will be only the 1st of November.

Well, the main event of the evening — the presentation of the new iPhone. The first disappointment, however, has already become a pattern, is that almost all the features were leaked before the presentation. In fact the only unknown factor on it were the names, which argued the experts. Here, by the way, it is worth noting a positive shift in Apple’s approach to device names compared to last year. Instead of tangled and stretched XSMax and XR we introduced the iPhone 11, iPhone 11 Pro and 11 Pro Max iPhone where the iPhone 11 is a relatively budget device, but Pro — flagship.

So, as the iPhone 11, for those who are not willing to pay $1000, but want good photo and video capabilities, this camera is fine. He became slightly more powerful than its predecessor (and in fact it is replacement iPhone XR), there is hope for more time, and the second camera module promises great shooting in daylight and lit at night.

The strategy last year has proved very successful, even in the 1st quarter of 2019, just half a year after the release of the smartphone, according to Canalys, Apple managed to sell iPhone XR totaling about $12 billion!

As for the versions of Pro and Pro Max, it should be noted that the module of the 3 cameras does not look as bad as it looked at first the leaks — after all, Apple is still working great designers, who, though not running the show, but know their business well. Of course a more powerful processor, new screen, according to Apple’s statement will be more energy efficient and can extend the life of smartphones for an hour.

Total: new devices, new services, the new design is present, but the delight of the audience there. How so? It’s very simple — the presentation was boring. Yes — professional Yes — rich, but still boring.

Once upon a time, back in 1982 one of the classics of management , L. Ron Hubbard said: “a theatrical Element that is present in the presentations and in marketing, gives things bright and jaunty look — thanks to him, they begin to stand out and they are starting to notice.” And here it would be possible to joke that the presentation took place at theatre of a name of Steve jobs, so with the theatrics of the order. But no. The main part of the “theatricality” is not the effects and not the scenery, not the quality and not the size of the stage. The main part, which had mastered Steve jobs — drama.

Yes, Steve jobs was able to put into the presentation and the plot, and the intrigue and the culmination. He had excellent videos and slides, but they only reinforced the effect created by the presence of a thought out plot, which absorbed the audience. If you enable the presentation of the first iPhone, it is unlikely to be able to break away from her, despite the fact that you know this device, as it functions today is no surprise. The essence of a masterful story of the presentation and at least master it.

And if you put aside the nagging in the spirit of “jobs was great, and nobody will replace” still remains the story itself, which from year to year is becoming more predictable, mundane and boring. And it requires not so much a great speaker (which jobs certainly was) as good a writer, which has modelled it.

Well, whatever it was, crowds of fans will certainly run to update their phones and to buy the coveted apples for gifts to girlfriends and friends. Another issue is that every year it was the fans becoming less and those who simply use the company’s products from Cupertino may not want to go with a powerful and high-quality flagship of the past, even last year.

Likely Tim cook understands this, and including why Apple is gradually moving from a company that makes mobile devices, a company that provides virtual products like music, movies, apps, and now the series.

Will see if it works this tactic, and will it help Apple remain the most valuable company in the world. Although, I think it might be and it might work.