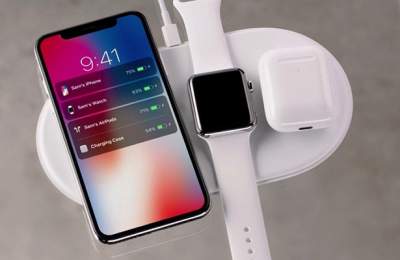 Accessory due to changes in the configuration will be slightly thicker.

Wireless charging AirPower from Apple may debut in the coming months. The company intends to release the device along with the updated case for AirPods this spring.

Accessory due to changes in the configuration will be slightly thicker than previously expected, according to the source MySmartPrice. Apple is also working on several exclusive features for AirPower, which will only be available with the release of iOS 13. Perhaps the device will be able to recognize what gadgets to connect to it, and will assign identifiers to track the progress of each of them.

The accessory will also determine which of the rechargeable device with a large display, to display the percent charge of the battery. Estimated price wireless charging will be $150.

Simultaneously with Airpower “Apple” Corporation is also preparing a new version of AirPods. According to the portal, design of wireless headphones, not counting the new cover will remain virtually identical to the original, but with a different filling. The developers will improve the quality of the bass and add more sensors, including for monitoring heart rate. New AirPods come in two colors (white and black), and their price will be about $200.

Apple released the first beta of iOS 12.2 for developers, which includes a new settings screen for wireless headphones AirPods. Judging by the published image, the owners of the accessory will be able to call “Apple” assistant using a voice command “Hey Siri”.