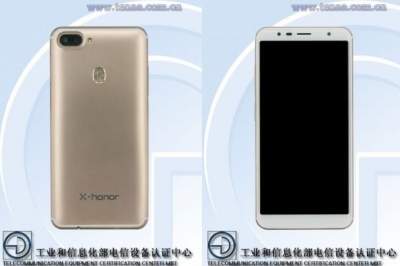 New and unexpected is the appearance of the brand X-honor at the bottom of the rear panel.

On the website of the Chinese center for certification of telecommunication equipment TENAA was seen new smartphone Honor V12.

Suggest that the smartphone could be the first in a new line of brand – X-Honor.

It seems that Huawei will miss the number 11 and present Huawei Honor V12 this year. The proof is the appearance of this model on the website of the Chinese center TENAA and the us FCC. On these sites there are some details about the new gadget.

The image on the website TENAA, talking about design Honor V12, which however, is pretty standard. Smartphone cost without a cut in iPhone style X. the Device is enclosed in a metal enclosure, dual main camera, front camera with flash, a fingerprint scanner on the rear panel and a 3.5 mm connector on the bottom edge.

New and unexpected is the appearance of the brand X-honor at the bottom of the rear panel. It is likely that soon there will be a new line of smartphones Honor.

Experts point out that Huawei, most likely, will Honor the V12 to position as a more affordable smartphone compared to its predecessor. Presentation of Honor V12 can be held in the summer of 2018.