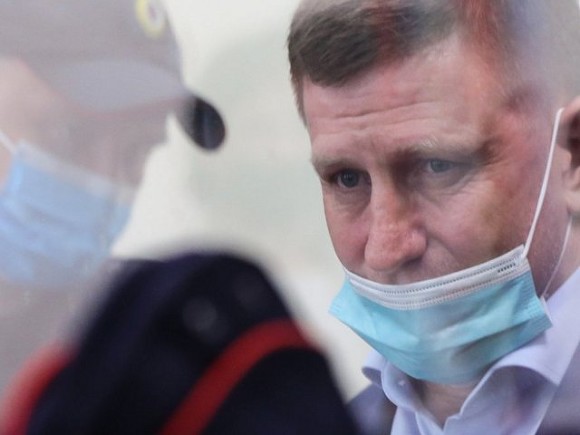 Medvedev tipped for a Matvienko, from the Central Bank trying to put Nabiullina, and in Khabarovsk cleaning team Furgala.

Khabarovsk does not give up Degtyarev

The new head of the Khabarovsk Krai Mikhail Degtyarev works under the close supervision of the Department of internal policy of the presidential administration is the most sustainable now hearing about it. Supposedly it constantly are in contact, the curators from the AP, and under their dictation, he began to change the provincial leadership, although earlier hinted that is not going to do that.

Says a source close to the team arrested the ex-Governor Sergey Furgala fired just a conditional “core resistance”. Perhaps those in the Kremlin believed to be responsible for the organization of protests.

So, dismissed the first Deputy Chairman of Khabarovsk Krai government, the main “organic” (chief of staff) Vladimir Khlapov. As noted, he has long worked in the team of Viktor Ishayev, Khabarovsk who was Governor from 1991 to 2009, and then until 2013, he held the post of presidential envoy in the far East. It Ishayev many call the mastermind of the campaign of resistance to Federal decisions, including a victory Furgala the election for Governor in 2018.

Fired Degtyarev and “economic” Vice-Governor Yuri Zolochiv, although the Khabarovsk administration to work in such major organizations as VTB, “the Renaissance-insurance” and financial group “alpha”.

At the same time, most Degtyarev its advisers are allegedly forbidden to communicate with the local protesters. Thus begins the second wave of the crackdown. And the Governor said that the weekend, when are the opposition rallies, he intends to conduct outside of Khabarovsk — is clearly to show that he enjoys the support of “ordinary people”, and in the capital region, as he put it, the streets are “shouters”.

Joined, even the President’s press Secretary Dmitry Peskov, who told reporters that in Khabarovsk meetings go visiting “pseudo-oppositionists”. Although the stories about the support to protests from abroad, the authorities still had to stop.

From the situation in Khabarovsk now looks like the protests and the truth is gradually coming into decline. Perhaps this is due to the fact that it destroyed their organizational core. So that, says a source close to the leadership of the Khabarovsk territory, now comes the moment of truth. If the protesters continue to act without the informal support of the local elites? If so, the Federal centre again made a mistake and he will have to find another way to bring the situation in the region under control. Any other tools to solve this problem, in addition to brute force, in the Arsenal of the Federal center no one now sees.

Medvedev “they drop off” in the Federation Council

Anonymous telegram-channels suddenly began to “Woo” former President and former Prime Minister Dmitry Medvedev on a post of the speaker of the upper house of Parliament. Implying that it is a “Kremlin mnogohodovki” because Valentina Matvienko, who now holds this post, has allegedly become almost the second most influential in the country man. Moreover its capabilities are so vast that even the President, assured clogmaker, unable sometimes to cope with it.

Here Matvienko has allegedly decided to “move” to some less important post. But she skillfully resists, technically preventing the President to appoint Medvedev as Senator for life. Others by the former President in the Federation Council delegate does not wish to, although just coming a Single day of voting in September, and it could make a Senator one of those heads of regions who need to confirm their authority. But the new head of the Federation Council, says a source close to the administration of the President cannot be a puppet of the Governor — only the President personally.

However, the same source questioned the timing of the rumors of a new sharp aggravation of the struggle for seats in the country’s leadership. Rather, according to him, in September to move from their posts will have some officials in the presidential administration. At the end, so to speak, of all the political events since January for the September Single day of voting. Even rumors that Prime Minister Mikhail Mishustin can become the successor of Putin, what spoke after his report to Parliament and look more convincing than castling Medvedev Matvienko.

Head of the Central Bank was again involved in personnel hearings. On the eve of the Central Bank revoked the licenses of several banks, where the regulator found a whole bunch of violations. But the main problem, apparently, began the withdrawal abroad of individuals, and some giant, has not officially voiced the amount. Probably covered another major washout, and allegedly controlled by Russian security forces.

True or not, but against Elvira Nabiullina at the same time launched a powerful media campaign. Attacking her personally, and the whole policy of the Central Bank as a whole. Anonymous telegram-channels write that Nabiullina’s about to be fired. The alleged news about it disappeared from the media, she had not met with the President and all this is a sign that she’s fallen out of favour.

Meanwhile, according to a source close to the leadership of the Central Bank, the situation is quite different. The fact that we are approaching a full-fledged economic crisis, caused by the effects of the epidemic of the coronavirus. It can become obvious in the fall, and Elvira, with the consent of the President, just preparing the weak Russian financial system to ensure that it is without great and scandalous losses have made it through this storm. So the leadership of the Central Bank are simply not up to active public public relations.

Which of the two version will be closer to reality it will become clear and the truth is likely to fall. It was then that the country is projected by many experts to feel all the effects COVID-19, that is, “in full”.