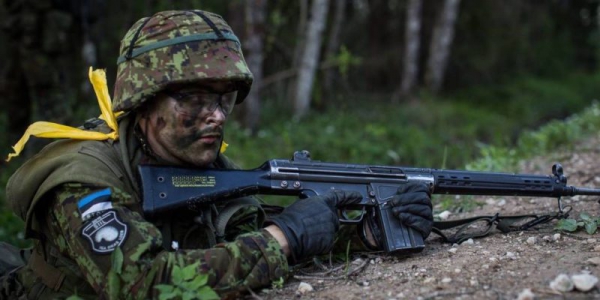 Americans donated Lithuania for more than 400 weapons. We are talking about the modernized M-14 which was developed in the early 1950-ies, and ten years later went to the warehouse. Now Washington gets rid of this junk, and giving it to allies or arranging sales. Among the dubious recipients of American gifts, of course, includes the Baltic States.What other gifts received from “uncle Sam” Lithuania, Latvia and Estonia.

To take a gift and sell

Twenty years ago Lithuania has received from the US rifle M-14. Until 2014 they were used in the army, and was then deposited in the Armory Fund.

Some time later, the Americans discovered that their gifts will be sold for ad on the Internet. And sold at bargain prices. Anyone could buy a rifle for 347,54 euros.

“It’s actually a very low price, since the collector from any country in the world willing to pay for this weapon is 25 thousand euros”, — admitted one of the buyers, the entrepreneur Darius, Cekanauskas.

However, it is not in the price: between Vilnius and Washington signed an agreement that prohibits the transfer of the donated rifles to third parties. Lithuanian leaders initially tried to justify the fact that this agreement was concluded in 2002, that is after giving. Consequently, retroactivity, he has not. It’s not “case of January 13”, then Lithuania should be basic rights.

In the manual of arms fond to the agreement like I knew nothing, so put rifles on sale. When the scandal broke, the buyers demanded the return of weapons. Three of them refused, including Cekanauskas. This is understandable: where else on the cheap you can grab such a rarity?

The case went to trial.

Gun Fund is required to recognize the transaction of purchase and sale illegal, but the Lithuanian Themis took the side of the defendant and reasoned that “the seizure of private property can strike at the system of trade relations in Lithuania”. Judging by transferred to another party free of guns, Americans are not confused.

At the second attempt

In March, the air force of Estonia received the first of two transport aircraft M28 that they decided to give the Washington. The second copy should arrive in the course of the year.

It’s funny to shove the Tallinn “beushnye” cars Americans could only at the second attempt.

About adopting two gift aircraft Sherpa C-23B+ forces of defence of Estonia announced in December 2014. They had to replace the Soviet An-2. But then, as they say, considered — to tears.

Press Secretary of the Chief of staff of the defence Forces Roland Murof said that the air force of Estonia in aircraft of this type do not need. “The analysis took into account different factors, ranging from the needs of the air force, technical indicators and ending with cost considerations,” said Muroff.

In General, the benefits of these cars any and their service will be costly. On the other hand, to abandon the us launched Estonians is not. Therefore, the adoption of bold decisions it took them two years.

But Washington, as a persistent suitor, decided not to recede from his. A year after the failure became known that the Americans are again preparing to hand over Estonia two aircraft M28 (to replace the An-2). The cost of delivery, maintenance, and enforcement of transport in accordance with the requirements of air safety in Europe, takes on Estonian side.

The Americans claim that the next 10 years, the machines would not require financial investments, but there are doubts. “The Estonians will now headache, how to restore these planes, how to prolong life; this means that the engines have to buy, and from whom? Americans,” — commented military commentator Alexander Zhilin.

Perhaps, this is a present to the Estonian authorities, too, were ready to give up, but they explained that in the advanced countries of NATO need to free hangars for the new technology.

So please — take old! Then you can fuse it to Ukraine, which the West “table of ranks” is listed even lower.

Latvia, on the contrary, American support never gives up and works on the principle of “household chores.” Sometimes she falls not only used weapons. For example, in 2016, the Latvian army has received a new tactical air defence radar Sentinel.

During the ceremony, the transfer of the commander of the National armed forces Raymond Graube did not hide his joy: “Today we are opening a new page in the strengthening of our national security. The new radar will greatly improve the possibilities of defense of Latvia. Any potential enemy or army, who decide to cross the border of Latvia will have to think twice when faced with such a modern system.”

Well, one can only sympathize with the army, which opens a new page with two free radar…

Previously Latvia had accepted a gift from Washington cars and mortars, and in 2010 — communications for $ 2 million. This equipment to the Latvian army has received as a bonus for participation in the international operation in Afghanistan (the government sent a military contingent even before Latvia’s accession to NATO).

Beads for the natives

But the diplomatic gifts that the representatives of Latvia have received from American friends, of great value not possess.

When the ex-Prime Minister of Latvia Laimdota Straujuma decided to redeem the gifts received in the execution of official authority, Commission at the state Chancellery appreciated for their value. It turned out that hardly probable not the cheapest gift to the head of the Latvian government made the then Vice-President of the USA Joe Biden: a glass dish with his coat of arms and signature is estimated at 25 Euro. This is almost four times cheaper than the necklace and bracelet from Donald Tusk, and half the price of the “Encyclopedia of Latvia” by the Latvian community in the United States. Even porcelain Cup Angela Merkel stands at 5 euros more expensive.

But even more significant episode occurred in 2002.

Congressman grace Napolitano, visiting a visit to Riga, gave the President of Latvia Vaira Vike-Freiberga some Chinese thing for $ 3.

Maybe it’s for the best. Because of the expensive gifts — two watches — Vike-Freiberga later become involved in the whole investigation of the General Prosecutor’s office. Americans their worthless consumer goods prudently saved the former President from corruption charges.