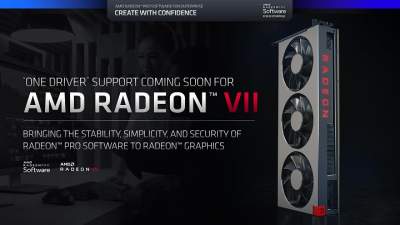 AMD announced the release of new firmware for Radeon VII.

AMD announced the release of a new version of the Radeon driver Pro Software for Enterprise 19.Q1. It is designed for video card series Radeon Radeon Pro and Vega Frontier Edition and is able to offer performance gains of up to 33% compared to last year’s driver Enterprise 18.Q1. However, the most interesting “feature” of the latest issue is to support the consumer Radeon VII.

As previously reported, the Radeon VII can boast compute performance double precision (FP64) at 3.5 teraflops. In the relative value of the average is 1/4 of the processing power in single precision FP32.

For gaming AMD and Nvidia a typical value equal to 1/16 FP64 FP32, while professional accelerators are characterized by 64-bit precision at the level of 1/2 of FP32. Thus inherent in Radeon VII potential closely approximates this card to professional solutions.

After the release of Radeon Pro Enterprise 19.Q1 the line between gaming and professional adapters and all becomes conditional on the example of Radeon VII. Moreover, the vendor promises the introduction of a unified “One Driver” for all AMD graphics cards. This function allows “on the fly” to switch between drivers Radeon Pro Radeon and Adrenalin. All of this means an opportunity to start working and gaming applications on the same system without needing to reboot.

In addition, AMD announced the release of new firmware for Radeon VII, which will be added support UEFI. The installer will be available for download from the website amd.com. As it turned out, new out of the box does not have UEFI support, which when the system is activated the CSM (Compatibility Support Module). Note that ASRock is already posted for free a new firmware update for its version of Radeon VII. 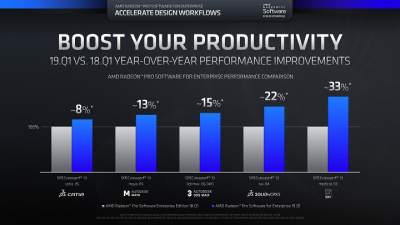 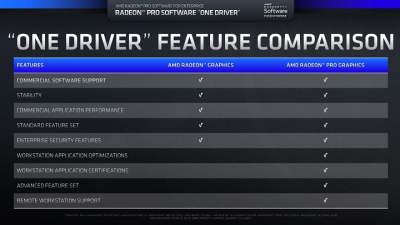