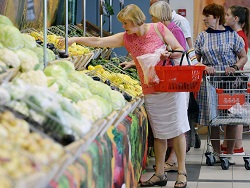 The Russians do not believe in a possible decline in price growth. The Central Bank gave in July an increase in pessimism of our fellow citizens — half of them do not believe in the target of 4% inflation for the year. Pessimism grows as deflation in the last week of July prices were down 0.1%. The Central Bank advised to Russians to stop thinking too much about the price — because of the sad thoughts they grow faster.

In July of this year inflation expectations rose sharply. In the planned Central Bank target for inflation this year to 4% do not believe about 46% of the respondents. This is evidenced by studies of the Bank of Russia.

“Direct assessment of the “old” (median value) calculated from the responses to the question about the level of inflation, increased compared to the previous month (by 0.4 percentage points to 10.7 per cent),” — show survey data.

Among the reasons of such pessimistic expectations, the Central Bank refers to the increase in utility tariffs, as well as the expected poor harvest due to adverse weather.

Assessment of the “old” inflation expectations still far exceed the target level of inflation at 4%, says the Central Bank.

“The situation indicates the continuing proinflationary risks associated with higher inflation expectations and their sensitivity to the dynamics of prices on certain goods,” writes the regulator.

Because expectations of rising inflation at the meeting of the Board of Directors on 28 July, the Central Bank decided to reduce the key money market rate, leaving it at 9% per annum.

The pessimism of the Russians in the summer, when traditionally lower prices on fruits and vegetables and people feel deflation due to too much attention to the problem with the harvest because of the cold summer, experts say.

This spring the weather center recorded one of the lowest temperatures in history. The Director of the Department of monetary policy of the Central Bank Igor Dmitriev called the June inflation “shock” and “unpleasant surprise”.

Published on 12 July report of the Bank of Russia pointed to the possibility of maintaining unusually high for the season the price of vegetables up to September 2017.

The latest data of Rosstat confirm the optimism of the Ministry. According to the statistical Agency, in Russia from 25 July to 31 July for the first time in 2017 recorded weekly deflation of 0.1%.

However, as explained “Газете.Ru” Deputy Director, “development Center” Higher school of Economics (HSE) Valery Mironov, because crop failure leads to growth of imports and the ruble is unstable, then for the daily expenses of Russians weather can still affect. “The fall of the ruble, the impact of crop failure will be stronger”, stated Mironov.

“Talk about bad weather by themselves increased the inflation expectations of the Russians, and also gave some retailers an opportunity to raise prices. Against the background of a continuing fall in real incomes of the population it is difficult to believe that appreciable slowing of inflation”, — commented the first Vice-President of “OPORA Russia” Paul Segal.

In June 2017, according to Rosstat, real disposable monetary incomes of the population has not changed in comparison with June of 2016. In January – may declined by 0.8%.

Meanwhile, the Central Bank advised to Russians to think less about inflation, as it is such sentiments and help inflation to rise.

The reasons why the Russians are also confident that the country is experiencing the same rate of inflation, after the collapse of the ruble in late 2014, relate to the field of psychology, the Director of the Department of studies and forecasting of the Central Bank Alexander Morozov. He also advised the Russians to find in their consumer basket items, prices of which do not grow or even decline.

“Let’s say the price of my haircut has not changed for two years, and prices for curtain cleaning for the last time even decreased,” he argued.