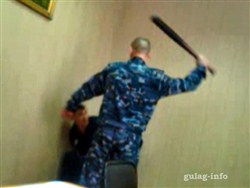 About the correctional colony IK-4 in the Belgorod region, where recently transferred the players Pavel Mamaev and Alexander Kokorin, told in an interview to “Soviet sport”, her former prisoner Valentin Sokolov.

According to him, there are harsh rules, almost all newly arrived prisoners are beaten. “Wooden stick” head of the colony Plyasova “I remember many,” – says Sokolov.

However, famous players, says Sokolov, hardly waiting for the beating, they are likely to send you to the preferred squad number 8. They will be able to improve the football field, which is now covered with black ash.

There are in the colony, according to Sokolov, and the criminal authorities, which ensure that prisoners did not fight with each other.