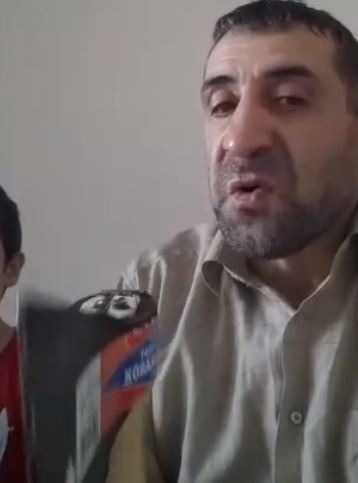 The police of the Yamal Peninsula handed over today to the district investigation Department of the TFR materials of pre-investigation checks on the fact of appearance in the social network “Vkontakte” a video threatening the life of the head of Novy Urengoy Ivan Kostogriz. About it Znak.com reported in the management of Affairs in the YNAO. Published in the short video, a local resident, Musa Mammadov, along with a teenage son threatened to kill the mayor. The city authorities have already commented on the incident and on the sidelines, local officials say that Mammadov, who voluntarily moved into housing, lost all the courts and now he’s being evicted, deliberately making a show, to blackmail the mayor. Before he climbed onto the ledge of the balcony in an apartment building and threatened to commit suicide.

Videos in the group “New Urengoy” the social network “Vkontakte” has placed today user under the name “the Orphan Kazan”. According to the requirements of Roskomnadzor we are unable to publish it due to the presence in the video swear words. Omitting the obscene language, threats Mammadov Kostogriz are as follows: “If you, Kostogriz, again to get in my family through police officers, the investigative Committee, Prosecutor’s office, by Allah, I ax you to pieces will do. Parasite. You have brought us already. You, the terrorists, my house was destroyed. This will end very badly. If you’re a man, let’s go out one on one.”

His words Musa Mammadov backs, shaking in the frame with an axe. In the background is his son, who is holding a huge knife and after the application of the father completes his threats with the phrase: “next time you touch my father, I’m down”.

This is not the first public performance Mammadov. Local authorities said that the day before he threatened to commit suicide while on the balcony of a multistory building.

Sources in the administration of Novy Urengoy explained Znak.com the background of the threats Musa Mammadov. According to them, the man in the 90-ies of the illegally occupied housing and during the procedure, the resettlement program of old and dilapidated housing officials allegedly uncovered a Scam through which he received in a wooden house living space. The authorities had decided to evict him from the apartment and has won a series of courts which followed that decision. “Reason to stay in the apartment in the neighborhood of the Tundra have no Mamedov, explains our source. No one is going to cross the law and give him an apartment. Last week he went with an ax in the TFR. A few years ago, allegedly tried to burn himself in the tent sat in front of the city administration. I think he is trying to blackmail the government.”

Another source familiar with the situation said that at the time, representatives of the municipality of New Urengoy offered to help him with the work, to arrange in a dormitory, but he refused. “He doesn’t need it all. He needs a show”, concludes our source.

The locals, discussing the act of Musa Mammadov in the comments to the video, the vast majority regarded him critically. One of them Svetlana Hotel published below the video review of the city administration regarding the incident in an attempt Mammadov to jump off the balcony. “Security threats for residents of the city in connection with the incident in the neighborhood of the Tundra, where a man threatened to commit suicide, no. Now law enforcement agencies are investigating the incident. According to available information, the deterioration of the situation occurred after the attempt of the employees of the bailiff Service to give Musa Mammadov in the premises of the Investigative Committee of the Russian Federation notification about the forthcoming eviction by court of illegally seized his apartment in the neighborhood of the Tundra. All actions conducted by the security forces against Musa Mammadov, are regulated by departmental normative legal acts, the city Administration is not authorized to interfere in their procedural activities, to give any instructions to the heads of law enforcement agencies to conduct any action in connection with which we recommend for comments on this to address to the press-services of power structures of the city”, — said in the statement.

Officials also reported that “the situation of Musa Mammadov times comprehensively studied from a legal point of view”: “Mr. Mamedov has no legal claim to receive housing in the New Urengoy. The house in which he lived before, or the departmental and to the city Fund does not have any relationship or demolished as dilapidated or condemned and ready for demolition. All the courts on this issue have already been passed. The decisions are clear: the legal rights on the requirement to provide housing on an exceptional basis, at no Musa Mammadov. However, the city administration is always open for dialogue with citizens. With each of the applicants is an individual work. Consider different options to address the issue or are given an explanation of the rights of the citizen. The city administration in April this year suggested that Musa Mammadov to discuss the situation — unfortunately he did not go to the dialogue.”